(Prayer offered by Brian Ciccone over the Public Address System on Monday, 28 October 2013)

Let us remember we are in the holy presence of a loving God.

So listen: I am very worried about something.  Yes! Something has me concerned and I think only you can help me.  Today I am asking you to join me in saving the endangered high five.  Yes, the high five, that once glorious thunder clap of coolness. Gone are the days of the Top Guns and only you can help bring back the validity and integrity of the high five.

I don’t know if it’s Nick Mercurio or what, but I have been thinking a lot about Jesus lately.  So in this plea to save the high five I ask you to consider the following: WWJHF, Who Would Jesus High Five?

Back in the Glory Days, a high five was a celebration of some great success.  You would high five if your team won the big game, when you did well on a test, when you overcame some challenge.  Now it’s  “Awesome snap chat bro, high five” and “OMG your hair looks so hot, high five.”  We throw up a high five for the least exceptional moments of our lives.

In fact, more and more I get the sense that we offer a high five not only for just the shallow and pointless things in life, but also for wretched and deplorable things.  We use this once noble form of support to commend getting away with cheating on tests and academic dishonesty.  We high five when we brag about illegal activities and sexual exploitations.  And when a group ridicules someone, makes fun of them behind their backs, jokes at someone’s expense, we applaud our lack of love and compassion with the honorable high five.  Would Jesus give you a high five for: your new iPhone, that crazy party last night, or your cruel judgment of someone else?

Now, I have no issue with the use of the high five as a means of greeting.  While it is simply a crude form of a handshake, a sign of friendly welcome for centuries, showing brotherhood through a high five is perfectly acceptable in the right circumstances.  What I can’t stand is that the simple high five greeting has become a 20 minute self love fest between two people who have choreographed some elaborate display.  It’s as if you are saying “our friendship is more important than anyone else’s and everyone can see that by how long it takes us to shake hands.”  Would Jesus only high five certain people, the people who publicly claim to know him best, the ones that suggest their relationship with Jesus is more truthful or real than someone else?

One other thing that endangers the greatness that was the high five is how self-indulgent it has become.  It used to be that someone offered a high five to someone else for their good work.  Now it seems that the moment we think we have done something even slightly worthy of praise, we throw up one hand looking for someone, anyone to validate us.  And I wonder if we are more interestied in others glorifying us, than we are willing to extend our own hand in appreciation of someone else’s good work.

When crowds gathered around Jesus, we never hear in the bible that he ran up and down the length of that crowd slapping high fives to the adoring fans.  No, Jesus never used his hands looking for self-glorification, rather he used them to feed the hungry, heal the sick, and care for the poor, actions he did for God’s glory alone, never looking for others to confirm his good works.  Would Jesus high five you because you think you deserve it or because you do good work without seeking recognition?

Dear Lord, Help me to appreciate the truly wondrous things you have surrounded me with in my life.   Let me be your hands on Earth to do service in your name and show appreciation to others for the work they have done.  And let me do these good works without expectation of return, knowing that if I want goodness and love in the world I am called to be that goodness and love.

(Prayer offered on the Public Address system on Tuesday, 22 October 2013 by Michael McNamara)

This awareness of God’s presence, toward which we repeatedly refocus, is a gift of humanity.  It reminds us of love, of mercy, of each other, of the entirety of creation.  And although this awareness is certainly more difficult for us at some times, there is such a rich and deep variety in this simple act.

But what I really want to talk about today are those leaves! 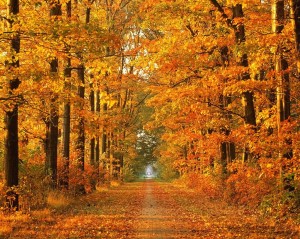 My gosh!  I have been on this earth for nearly three score and ten autumns, and I am stunned by this beauty around us.  Sometimes driving home, even in the city, a small tree, half-empty, startles me with its color, and speaks to my heart in its unleaving.

The autumn brings us so very much:  color and coolness, joy and grief, change and eternity.  Let us immerse ourselves in this drama. 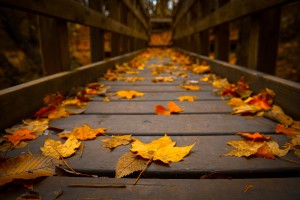 Praise God in his sanctuary; praise him in his mighty firmament!

Praise him for his mighty deeds; praise him according to his exceeding greatness!

Let everything that breathes praise the Lord!

Live, Jesus, in our hearts.  Forever!

While reading this past weekend I came across the following article written by Joanne Lipman in The Wall Street Journal, Sept. 27, 2013. Joanne clearly points out that children who experience the right amount of strategic stress and instruction that causes them to stretch beyond what they themselves believe they are capable of, continue to grow, learn and become more resilient. It is imperative that we challenge our students to work smart and put in a consistently high effort with their learning experience.

Eight Reasons Why Toughness Pays Off in the Classroom

In this thoughtful Wall Street Journal article, Joanne Lipman remembers Mr. Kupchynsky, her tough-to-the-point-of-abusive orchestra teacher at East Brunswick High School in the 1960s. Mr. K, as students knew him, would call students “idiots” if they messed up and shout “Who eez deaf in first violins!?” if someone played out of tune. “He made us rehearse until our fingers almost bled,” she says.

But when Kupchynsky died a few years ago, there was an outpouring of love and respect from hundreds of former students who had gone on to success in a variety of fields. “Research tells us that there is a positive correlation between music education and academic achievement,” says Lipman. “But that alone didn’t explain the belated surge of gratitude for a teacher who basically tortured us through adolescence.”

Lipman’s question: “What did Mr. K do right? What can we learn from a teacher whose methods fly in the face of everything we think we know about education today, but who was undeniably effective?” Stressing that she doesn’t support abuse (“I’d be the first to complain if a teacher called my kids names”), she lists the following:

• A little pain is good for you. The much-quoted study by psychologist Anders Ericsson showing that 10,000 hours of practice is needed to attain true expertise also found that the path to proficiency requires “constructive, even painful, feedback.” High-performing violinists, surgeons, computer programmers, and chess masters “deliberately picked unsentimental coaches who would challenge them and drive them to higher levels of performance.” [See Marshall Memo 192 #3 for a related article.]

• Memorization pays off. Fluency in basic math facts is the foundation of higher achievement, but many American students aren’t learning their times tables and basic math facts. Lipman says one reason Asian students do so much better in math is the hours of drill in their schools.

• Strictness works. A study of Los Angeles teachers whose students did exceptionally well found that they combined strictness with high expectations. Their core belief was, “Every student in my room is underperforming based on their potential, and it’s my job to do something about it – and I can do something about it.” A fourth grader summed it up: “When I was in first grade and second grade and third grade, when I cried my teacher coddled me. When I go to Mrs. T’s room, she told me to suck it up and get to work. I think she’s right. I need to work harder.”

• Creativity is not spontaneous combustion. “Most creative geniuses work ferociously hard and, through a series of incremental steps, achieve things that appear (to the outside world) like epiphanies and breakthroughs,” says Lipman. Creativity is built on a foundation of hard work on the basics.

• Grit is more important than talent. Angela Duckworth’s study of 2,800 high achievers found that the best predictor of success is passion and perseverance for long-term goals, not innate talent. Another key element of grit is students’ belief that they have the ability to change and improve, and this can be inculcated by teachers who share that belief.

• Praise must be strategic. As Stanford professor Carol Dweck has found, complimenting students for being “smart” has negative consequences, whereas praising a student for being a “hard worker” leads to greater effort and success.

• Moderate stress makes you stronger. Researchers have found that being exposed to challenges – including “a hardass kind of teacher” – builds resilience and confidence. What’s going on here? Lipman believes it’s that students are picking up an underlying faith in their ability to do better. Thinking back to Mr. K’s super-tough approach to his orchestra, she says, “There is something to be said about a teacher who is demanding and tough not because he thinks students will never learn but because he is so absolutely certain that they will.”