Amidst all the bad news surrounding sports one might be tempted to say that sports breeds selfishness, bullying, and a faulty ordering of priorities.  The recent story about Miami Dolphins’ Rich Incognito’s bullying of teammate Jonathan Martin is a tale of insensitivity, racism, and hateful use of media.

What makes the story all the more disturbing is that this bullying behavior had been going on since Incognito’s high school days  One wonders if anyone confronted him on his behavior.  What also makes the story disturbing is that some teammates and other NFL players, as well as others engaged in activities that turn their eyes from hazing and bullying, have tried to explain away Incognito’s behavior as “it helps to create team camaraderie,” or “it leads to male-bonding,” or “it helps to eliminate the weak.”

Enter a middle school football team!!  The actions of this mid-West group of middle-schoolers remind us that sports can be a positive within a community, sports can allow values to shine forth, sports can serve as a means of salvation (in De La Salle’s view of salvation as that fullness of life to which all are called!).

Both for the young man allowed to score the touchdown and for his teammates, a football game was an occasion for them to affirm life, to make actions speak loudly about care and community, to be changed by choosing good over evil.

Those “mere” children can teach all of us a valuable lesson about sports and about life.  When we put the interests of others before our own we often find that we too are fulfilled in a way we had never thought possible. 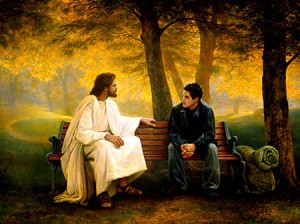