(Prayer offered on the Public Address system at La Salle Academy on Tuesday, 21 January, as part of Haiti Solidarity Week)

Let us pause and remember we are in the holy presence of God.

During spring break of my senior year in college, I went to Haiti on a service trip with some of my classmates. One day, while we were in the capitol city of Port-au-Prince, we spent the afternoon at an orphanage run by the Missionaries of Charity. There were at least fifty children living at the home and only three or four Sisters, who were so busy with washing, cooking, cleaning, and changing the children that there was hardly time to teach them, let alone play with them. 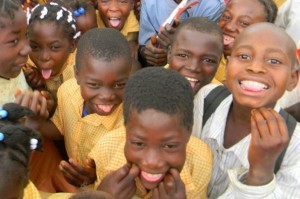 So when the eight of us walked in, the children pounced. For the next two hours we played tag and hide-n-seek, gave piggyback rides and served as human jungle gyms. It was easy for us to feel good about ourselves for all the smiles and laughter – to feel as though we were providing a valuable service and making a difference in those children’s lives. Thinking back on that day, however, doesn’t leave me feeling very good. It leaves me feeling small and powerless. What I remember most from that day was not the joy of the children or the generosity and love of the Sisters. I remember leaving, because as we walked out the front door we passed a small group of women, maybe four or five, who were lined up at a side door, each holding a small child. And as we piled in and slowly pulled away, I remember seeing the woman at the front of the line pass her child through the door to a Sister and turn to walk away, tears in her eyes. 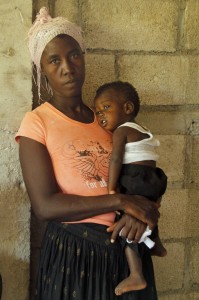 That was fourteen years ago. Haiti was already the poorest country in the west – a place with high unemployment, high illiteracy, and a high child mortality rate, all the result of a long and sad history of colonialism followed by corrupt dictatorships, a nation isolated from its neighbors because of the ignorance of racism. It was already a place where a young mother could be so desperate that she would pass her baby off to a Sister in hopes that the baby’s future may be brighter. Then, on January 12, 2010, at 4:53pm local time, Haiti was struck by a magnitude-7.0 earthquake.

Brother Dennis Malloy, the Brother Visitor for the District of Eastern North America wrote a letter recently to all the schools and agencies in our District: The magnitude 7.0 earthquake that struck Haiti on January 12, 2010 significantly deepened existing challenges and created massive reconstruction needs for a country that was already the poorest in our Hemisphere.  In response to this need, the Institute called for a worldwide collection that resulted in the initiation of an educational ministry that continues to develop.  Such a school is not an alternative but creates the opportunity for an education where there would otherwise be none. 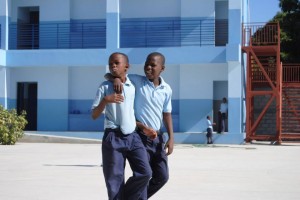 Opening October 2012 with one hundred students, the school has now doubled in size and serves over 200 youngsters from pre-K to 5th grade.  Many of the children are from a nearby orphanage and several are HIV positive.  Each year an additional grade will be added.  It is envisioned that a vocational component will be added for the upper school years, and ground was broken this past June for a Mother-Child health and wellness center largely funded by the District of South Mexico.

To commemorate the fourth anniversary of the earthquake, to remember the lives lost and the damage done, but also to celebrate the coming together of people of good will (including the Lasallian family) to contribute time and talent to Haiti’s resurrection, Brother Dennis has called on all schools in our district to participate in a week of prayer and solidarity for the people of Haiti. In his encyclical Sollicitudo rei Socialis, or On Social Concern, Pope John Paul II said that “Solidarity is not a feeling of vague compassion or shallow distress at the misfortunes of so many people, both near and far. On the contrary, it is a firm and persevering determination to commit oneself to the common good; that is to say, to the good of all and of each individual, because we are all really responsible for all.” So during this, our Haiti Solidarity Week, let us rise above mere feelings of compassion or distress and commit ourselves seriously to the idea that we are responsible for lifting up our brothers and sisters in Haiti. 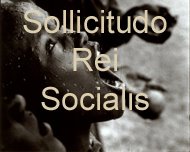 Heavenly Father, we remember in a special way this week the nation of Haiti, the hardships the country and its people have experienced, the lives lost, and the continued struggle to rebuild. We ask that you continue to bless Haiti and its people with strength to move forward, faith in your abiding presence, love of one another, and hope in your kingdom come. And we ask that you bless us so that we can come to know what it really means to be in solidarity with the poor of our world, and in-so-doing, grow closer to you, who are the God of the poor.

One thought on “Lifting Up Our Brothers and Sisters in Haiti”