Over the Winter vacation a group of students and faculty spent their break in Camden, New Jersey.  No, they were not in Camden because from there it is easy to visit Philadelphia; their destination WAS Camden.  Camden is a city devastated by lack of jobs and poverty and violence and substance abuse.  It is a city, seemingly, without hope.

However, that is not the case if you listen to long-time Camden Catholic pastor, Reverend Michael Doyle.

It seems as if the students, who for a week worked in soup kitchens, elder care, day care, cleaning a neighborhood center, assembling boxes of food, among other things, share Father Doyle’s deep appreciation for Camden and its people. 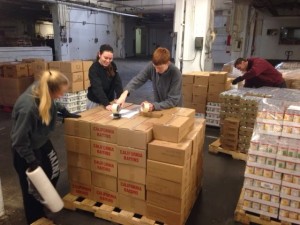 Here is a sampling of the student reflections:

The workers at the Neighborhood Center were all so loving and happy to be there. We met Zaire, who works with the after school program, and he seemed so passionate and in love with his job and the children he is with. The head of the program, Mike, sat down and talked with us about the Center, and its mission, but the the thing that stuck out to me was how he said that he finds God through working with the people who come through, and it isn’t about sitting in church, and that the people he meets and experiences have God within them, and that’s enough for him. Through this whole trip, I really find that to be true, that God isn’t just in the prayers we say, but in those around us who work hard to make life better for themselves or others.

Overall, something that I learned is that God is in all of us, even the broken and the ones that people have given up on. We may have our differences but God is what we have in common. I will take away that everyone is going through something so to be kinder, more understanding and forgiving. This week was by far one of the best weeks of my life and I will never forget it.

Elaine is a living and breathing saint, and the adversity she has had to overcome in her life makes me put things into perspective now. None of my hardships come close to hers so I will be thinking of her the next time I complain. I will also be using her advice and trying to forgive more. 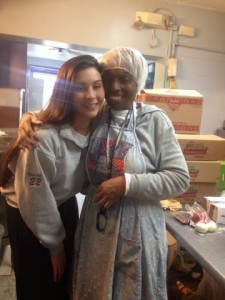 Throughout the day I wandered from table to table, but one particular conversation still remains in my mind. After helping her play an intense game of bingo, I asked a lady if she was originally from New Jersey. She said she was born and grew up in Camden, but the city has changed since she was little. It used to be a nice place to live, she said, but now there are too many greedy people. She went on (and on) to tell me that the solution was to love each other. After our conversation she left to take a nap and I sat wondering: if she can understand what it takes to make Camden a better city, why doesn’t everyone?

Today we went to the MLK Center, the Rutgers branch for children up to 2 1/2 years old. We spent the day playing with them, reading stories, helping them eat and other activities. All the children were so lovable and excited about us being there. There was one girl in particular, Shanelle, who would always run up to me and give me a huge hug. All of the children showed me the importance of loving one another and seeing the best in every situation. 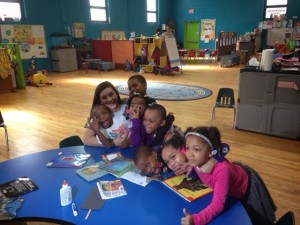 What better way to spend a February vacation than delivering some hope and receiving some hope, stretching oneself and finding a special center to one’s life, going outside of one’s comfort zone and finding a common humanity!!  Lasallian education aims at being transformative–for its students AND, through them, for the world. These young people learned, as has Father Doyle, that one person can indeed make a difference—“my bit in God’s hands is enough.”