(Prayer offered on the Public Address system for the La Salle Academy community on Friday, 7 March 2014, at the end of Poverty Week)

This morning I’d like to start the prayer with a quote from a President’s inaugural address: 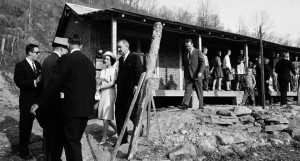 We have a unique opportunity and obligation — to prove the success of our system; to disprove those cynics and critics at home and abroad who question our purpose and our competence.

If we fail, if we fritter and fumble away our opportunity in needless, senseless quarrels between Democrats and Republicans, or between the House and the Senate, or between the South and North, or between the Congress and the administration, then history will rightfully judge us harshly. But if we succeed, if we can achieve these goals by forging in this country a greater sense of union, then, and only then, can we take full satisfaction in the State of the Union.”

This quote is from the 1964 inaugural address by President Lyndon Baines Johnson.  I watched and listened to this address on a black and white television with my family.  We didn’t have a color TV until nine years later which was my first year teaching here at La Salle Academy.

I still believe that the whole idea that education can improve and transform lives is true and the goals stated by LBJ are attainable – the time frame obviously must be adjusted.

“There is the strange reality in teaching. For a few months, we are front and center in our students’ lives… And then it all comes to an end. Students leave, move on, transfer, graduate, and, quite often, we never see or hear from them again… Teaching, in this regard, is the great open-ended narrative, the romantic fragment, the perpetually unfinished symphony. And, like all great fragments, a good portion of it works on and through our imaginations… Did Patrick, who talked about becoming a therapist, go on to graduate school in psychology? Did Jessica, who argued so passionately in class against the death penalty, make it as a lawyer?”

There is the possibility, “that some students – maybe most of them – will leave our classrooms, walk out into the world, and never give us, our lessons, maybe even our subjects another thought. Years later, the point of our entire course, or the concept that we drilled so repeatedly and emphatically, could be a multiple-choice question that they will get wrong.” 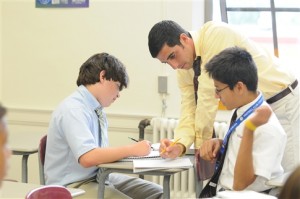 But maybe some students will get the message and will put it to some use down the road, whether or not they remember our names… Months or even years after they’ve graduated, students may develop an interest in a topic that they first learned about in our classrooms. Without even realizing or crediting us for it, a student may understand some allusion, get more out of some film, contribute to some conversation, figure out some mathematical equation, or make sense of some scientific data all because of something we said or did –

Let me conclude with an analogy. A child probably won’t remember most of what his or her parents did with them in the early years – the birthday party, the kiss goodnight, a family vacation. And yet all those things have played a part in sculpting him or her as a person. 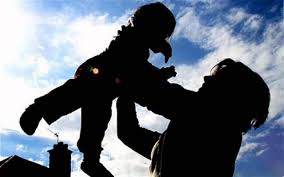 “The same goes for you, our students. I want to believe that what we do here in school and in the classroom matters on some level, –  that it will help to shape your sense of the world and will be responsible, in some small way, for your sense of self and belonging. If teaching is an act of faith, then we need to believe this in order to do our jobs.”  This is why the entire school this week sponsored the theme of “poverty week” during prayer each morning and in every subject area… so that at some point each of us will make a conscious decision to help those who are in need and those whom God has entrusted to our care.

Let us Pray:  Today we pray in unison, as La Salle Academy, for all those who suffer in the state of poverty; not just economic poverty, but for those in educational poverty – those with significant differences in cognitive style or development; those in affective poverty who lack personal, psychological, social and emotional resources and competencies to be able to meet normal developmental expectations; and those who have a poverty of values lacking in an appreciation of local social norms, or of the responsibility to the larger world community that all persons have.