Let us pause for a moment and remember that we are in God’s holy presence.

Projected on the screen in your classroom is an image of Rembrandt’s painting, The Storm on the Sea of Galilee. It was painted in 1633 and was inspired by this scene from Mark’s gospel: 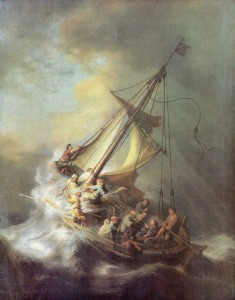 That day when evening came, he said to his disciples, “Let us go over to the other side.”  Leaving the crowd behind, they took him along, just as he was, in the boat. There were also other boats with him. A furious squall came up, and the waves broke over the boat, so that it was nearly swamped. Jesus was in the stern, sleeping on a cushion. The disciples woke him and said to him, “Teacher, don’t you care if we drown?”

I love the image of the boat at sea as a metaphor for our life’s journey or even our faith journey. Sometimes the wind is at our back and we experience smooth sailing…sometimes the wind dies down and we just sit there bobbing up and down, nothing new under the sun…and sometimes a storm comes that tosses us back and forth on the waves, making us anxious and scared and sick to our stomach. Like the image of the cross used by Br. Fred in yesterday’s prayer, we never know what challenges we will meet at sea – the question is how we will handle the storms when they inevitably come.

The coolest part of this painting is that there are actually thirteen people in the boat, besides Jesus. Since he had only twelve apostles, who is the thirteenth person? Rembrandt is known to have painted himself somewhere in his paintings from time to time, so maybe he is the mysterious thirteenth person. Or, maybe that thirteenth person is you. Look at the people on the ship and all their different reactions to what is happening.  Which one is you?

One disciple sits in the bow of the ship, at the top of the painting, trimming the front sail. Three more gather around the mast working frantically to fix the main sail. A fourth is at the very back of the ship, holding the tiller and trying to steer the ship through the storm. Could that one be Peter, the leader? These five disciples are focused on doing everything in their power to fix the problem.

On the left side a disciple is hanging onto a guy wire for dear life as the wave pounds in to him. On the right side another disciple looks with dread at the wave and his vulnerable friend. On the bottom left a third disciple leans overboard to vomit. For these three men it looks like the storm is just too much to handle. They are overwhelmed and scared. 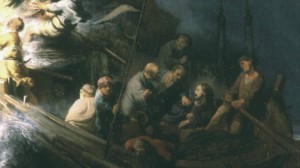 Right in front of Jesus are two men who look as if they are angry – they don’t understand how Jesus could be sleeping and not doing anything to help. You can imagine them screaming, “Teacher, don’t you care if we drown?”

In the middle of the painting at the bottom of the boat, a man in a blue shirt is holding a guy wire and staring out to sea. It actually looks like he’s staring at us. Maybe looking for another ship, for someone, anyone to help. To his left is a mysterious man in white with his back to us. Is he just accepting his fate? Sitting there and taking whatever hand fate deals him? The events around him seem to have paralyzed him.

Doing everything within your power or feeling overwhelmed or looking outward for an outside savior or just feeling paralyzed. I think I’ve felt like each of those twelve disciples at some point in my life.

Finally, there is a disciple at Jesus’ feet, the thirteenth man, sitting in the boat and looking at him. This disciple is the only one in the painting with a halo. He has put his trust in Jesus in the midst of the terrible storm.

Jesus got up, rebuked the wind and said to the waves, “Quiet! Be still!” Then the wind died down and it was completely calm. He said to his disciples, “Why are you so afraid? Do you still have no faith?” They were terrified and asked each other, “Who is this? Even the wind and the waves obey him!”

Father, you never promised that life would be without storms. But you did promise that you’d be there in the boat with us when life’s storms strike. Bless us with the strength and faith and desire to remain focused on you during these times.