Let us remember we are in God’s holy presence. 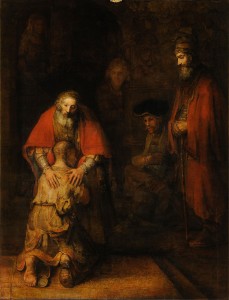 Projected on the screen in front of you is a painting entitled “The Return of the Prodigal Son” by the 17th century Dutch artist Rembrandt. It was inspired by the story about the lost son from Luke’s Gospel. Apparently, Rembrandt was quite taken with the story and there are multiple sketches of different scenes from this story in Rembrandt’s archives from throughout his life. This fascination with the story culminated in this painting, one of Rembrandt’s final masterpieces, the work of an old man who could look back on his life and sympathize with all of the main characters of the story in some way.

For those not familiar with the story, I will summarize. A wealthy man has two sons. The younger one, who by law has no right to his father’s inheritance, asks for his share of the inheritance while his father is still living. He then takes the money and spends it on booze and prostitutes. Broke, with nowhere to stay, the young man takes a job working with swine, an animal Luke’s audience knew was unclean under Jewish law. To emphasize the young man’s desperation, Luke tells us that he envies the pigs and the food that they eat. Eventually, he decides to go home and beg his father’s forgiveness – not because he is sorry but because he is hungry. As he is walking up the road to his father’s house, rehearsing his sob story in his head, the father sees him, runs to him, embraces him, forgives him, and calls for a celebratory feast for the lost son who has returned. The older brother sees this happen and throws a fit, which is completely understandable, since he has been a good son his whole life and his rotten little brother is having a party thrown for him.

Rembrandt’s painting captures that moment when the son returns. Let’s take a look. The father and the lost son are bathed in light in what is a pretty dimly lit scene. The young son is on his knees, his head leaning against the father’s chest. Whereas the father and older son are dressed in red, a sign of their wealth, the younger is now in rags. His left shoe has fallen off, his right shoe has a giant hole near the heal, both feet beaten up by a long journey. Whereas most men of the time had longer hair, the younger barely has any, but not because he is bald or balding. It looks as if his hair was sloppily cut, maybe in an attempt to remove lice or fleas. The father embraces him even in this wretched condition. Critics often focus special attention on the father’s hands, which appear assymetrical. The left hand is wider, with thicker fingers – a man’s hand, which is gripping the young son’s shoulder the way dad’s do. The right hand, however, appears more feminine – smoother, with long thin fingers. And this hand rests lightly between the son’s shoulder blades like a mother’s gentle touch. Those hands, both mother and father, represent the love and compassion of a God who cannot be confined by gender roles or stereotypes, but who embodies the fullness of all that is good in us, whether male or female, and all we are called to be, whether male or female—a God who will welcome us home no matter how far we have gone astray. On the right of the painting, standing upright (maybe uptight) is the older brother, the good and dependable son. Notice the look on his face, the way he holds his hands. Is he touched by the moment, bowing his head and folding his hands out of reverence as he witnesses this beautiful moment…or is he enraged, clenching both his teeth and his fists, since this sinner is being rewarded with a feast? How would you feel about this situation, about this brother who lived a careless life being forgiven and welcomed back by a father who seems to be careless with his love?

Henri Nouwen, a Catholic priest who wrote a book on this painting and this story, asks us to look at the painting and insert ourselves…are we more often the older brother? Or the younger? Nouwen says: “Rembrandt is as much the elder son of the parable as he is the younger. When, during the last years of his life, he painted both sons in Return of the Prodigal Son, he had lived a life in which neither the lostness of the younger son nor the lostness of the elder son was alien to him. Both needed healing and forgiveness. Both needed to come home. Both needed the embrace of a forgiving father. But from the story itself, as well as from Rembrandt’s painting, it is clear that the hardest conversion to go through is the conversion of the one who stayed home.” Sometimes it is hardest to forgive. Sometimes the harder task is not to judge those who have erred. That is why Nouwen reminds us: “Whether you are the younger son or the older son, you have to realize that you are called to become the father. Look at the father in the painting and you will know who you are called to be.” 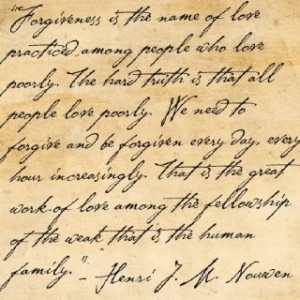 Heavenly Father, please forgive us when we have taken your love for granted and when we have strayed from the path of righteousness. Bless us so we can love like you, show mercy like you, and forgive like you, so that we can  join in that celebration at the end of time when all of us return home to you. Amen.