(A Prayer offered on November 18, 2014 for the entire La Salle Academy educational community)

“Do not have any anxiety about the future, 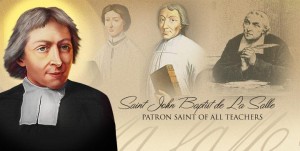 In November of 1691, John Baptist de La Salle found himself and his group of teachers in a dire situation. At that time, he and the Brothers had established several schools that provided a Christian education to all children without regard to social class or income, but their ministry was now at risk as opposition to De La Salle’s work grew and this fragile congregation experienced harassment and lawsuits. It was a bleak moment for the struggling movement that would become the Brothers of the Christian Schools.

We might expect that this overwhelming adversity would be enough for our Founder and the Brothers to quit or give up the schools. However, it was in this new crossroads that in 1691 a strong sense of association emerged among three friends—De La Salle, Brother Vuyart, and Brother Drolin. They vowed to keep together for the sake of the mission even if all others left and they were obliged to beg for alms and live on bread alone.  Together, they would discern what was best for the “Society of the Christian Schools” and what God required of them. 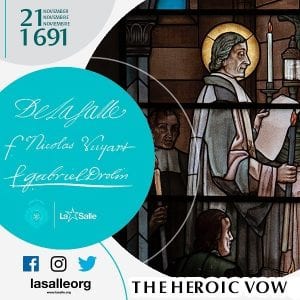 It came to be known as “the heroic vow,” a statement that radically committed these founding teachers to the work they were called to do. This “vow of association and union” pronounced on November 21, 1691, was an act of hope at a time when the work of De La Salle and the early Brothers was in serious jeopardy.

Surely these three men were fearful that all might be lost.  As those around them gave up, they must have questioned themselves and their ministry. Yet, in their dismay, they didn’t avoid their difficulties…they didn’t try to go around them. De La Salle, Brother Vuyart and Brother Drolin were steadfast. They had the courage and faith to step through their fear and into the light as they committed to each other and their shared mission. 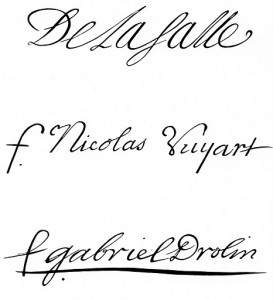 We all find ourselves in similar situations on that difficult road where fear and uncertainty blind our way. We face many adversities in our lives. Some of them we seem to bring upon ourselves and others seem to come out of nowhere. Some last only for a short time while others we carry for a lifetime. Either way we find ourselves asking, “Why does this have to be so hard?” “Why is this happening to me?” I am sure that these are the same questions that De La Salle and his Brothers were asking in 1691.

Is it possible that we experience these challenges and adversity because God wants more from us? Just as God knew the fruit that the Brothers of the Christian Schools would bear, He knows the gifts and talents that he has given to us even though we may not even recognize them yet. So God will push us, stretch us, prod us, and sometimes bring us to our knees in order to bring about our gifts that those around us so desperately need. So, when we find ourselves with what seems too much to bear, and we struggle to find our way, let us remember the words of our Founder, “Do not have any anxiety about the future, but leave everything in God’s hands for God will take care of you.” Trust and know that “you can do more with the grace of God than you think.” 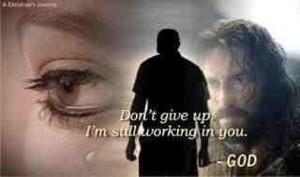 We pray for strength as we face our own adversity in our lives. Grant us the courage and faith to step through our own fears and into your light so that we might do your will.

Let us trust in your Providence. Just like La Salle called his Brothers to see themselves as older brothers to their students, so too we are called to be mentors to those around us so we can build a community of faith and love. We are called to touch hearts and change lives like La Salle and so many Christian Brothers have done before us.  We give thanks for all the Christian Brothers and all those who teach around the world in the spirit of De La Salle. 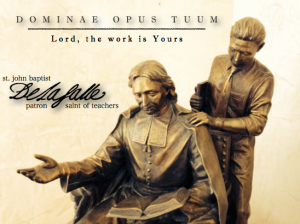 St. John Baptist de La Salle…Pray for Us.
Live Jesus in our Hearts…Forever.

Wynter Kelly–Dean of LSA Class of 2015