Many centuries ago, in the Middle Eastern country of Turkey, there lived a boy who spent a great deal of time in church praying daily to God.  As the years passed, this young lad grew up and became a priest, spending even more time in church close to God.  It is believed that his faith far surpassed that of all his neighbors and fellow priests.  The villagers where he lived knew that this man, Nicholas, the future Bishop of Myra, was special.  Throughout his adult life, Nicholas encountered many adventures, adventures that tested his faith, adventures that brought out the best in him, adventures that led him closer to God.  Once, after being wrongfully accused of a crime by the authorities, Nicholas graciously forgave his lying accusers once his innocence was established.  Another time, Nicholas was on board a ship traveling to the Holy Land when he miraculously saved the ship and its crew from disaster by praying to God, asking Him to stop the terrible storm at sea.  Nicholas is most famous for the story of how he secretly dropped money in an open window of his neighbor’s house so that the neighbor could offer the money as a dowry for each of his three daughters allowing them to be married in lieu of being sold as slaves. 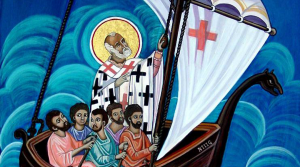 This man, this Nicholas, Bishop of Myra, lived a life close to God, forgiving the offenses of others and helping the less fortunate as much as he could.  In today’s Church, we recognize this man as St. Nicholas and tomorrow, December 6, we celebrate his feast day. 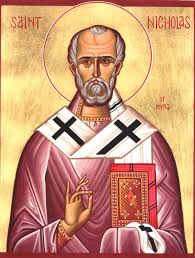 St. Nicholas’ popularity grew throughout the world as sailors went from port to port around the area of the Mediterranean Sea telling of his miracles and tremendous faith in God.

As centuries past, his stories lived on and reached the New World as settlers came in from many European countries.  It is thanks to those little Dutch children who celebrated St. Nicholas’ feast day that the spirit of St. Nicholas became that of “Sinta Klaus,” the Dutch equivalent of St. Nicholas.  As the children of other nationalities learned more about this great saint, they, too, celebrated his day, the day of Sinta Klaus.

As they tried to pronounce his name, it became a bit fractured and eventually turned into the name “Santa Claus.”  Yes, it became Santa Claus, that jolly old figure dressed in red carrying gifts to the entire world, that character whose generosity and popularity are rooted in the life and times of the real St. Nicholas. 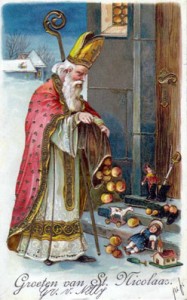 Later on, writers, artists, and big companies, like Coca Cola, Hallmark, and Macy’s, took the image of a bearded St. Nicholas dressed in red, white and gold church vestments and turned him into the figure we see greeting young and old alike in the center of shopping malls.  Santa Claus was made in the image and likeness of St. Nicholas, our church hero.  And for those of us who believe in Santa, we know that he embodies all of the goodness and generosity witnessed during the life of this wondrous saint. 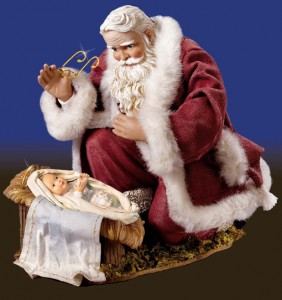 We, too, act as this great man did when we express our belief in God and His power, when we forgive those who harm us, and when we open our hearts to those in need around us.  As we celebrate the greatest birthday known to man, that of our Savior, Jesus Christ, we spread Nicholas’ spirit to others each time we offer a handshake or a hug or kiss to family members and friends and wish them “Merry Christmas.”

Let us pray today that we can be Nicholas-like, faithful, generous, and loving, not just for the next 20 days, but for tomorrow, next week, and throughout the entire year. 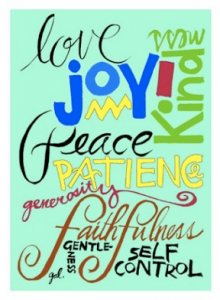 St. Nicholas, pray for us.

Live Jesus in our Hearts.  Forever!