Today is a solemn day for Jews across the globe. We are observing Yom HaShoah, or Holocaust Remembrance Day, to commemorate the 6 million Jews, Catholics, Gays, and Gypsies killed by the Nazi regime during World War II. This morning, in Israel, at 10am a siren will sound and no matter where its citizens are, whether driving down the highway, walking, in school, or shopping at the market, everyone will stop what they are doing and stand in quiet remembrance and reflection for one minute to honor those that lost their lives in the Nazi’s senseless acts of violence and terror. While Jews across the world recognize this day in many ways, the overwhelming theme that runs through all observances is the importance of remembering, recalling the victims of this catastrophe, and insuring that such a tragedy never happens again. The Shoah, or Holocaust, posed an enormous challenge to Judaism and raised many questions: Can one be a believing Jew after the Holocaust? Where was God? How can one have faith in humanity? Facing this event in history, does it really matter if one practices Judaism? Jewish theologians and laity have struggled with these questions for decades. The very fact that Jews still identify as Jewish, practice their religion, and have embraced the observance of Yom HaShoah answers some of the questions raised by the Holocaust. 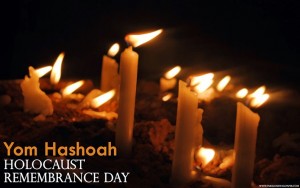 But many questions remain. It was very encouraging earlier this week to hear Pope Francis stand up and courageously equate the fate of the Armenians who suffered mass killings of its people with the genocides orchestrated by the Nazis and the Soviets under Stalin. Pope Francis said it is a duty of everyone not to forget the “senseless slaughter” of an estimated 1.5 million Armenians by the Ottoman Turks from 1915 to 1923 and that concealing or denying evil is like allowing a wound to keep bleeding without bandaging it. It is this last statement by the Pope that particularly resonates strongly with my family this year as we observe Yom HaShoah. 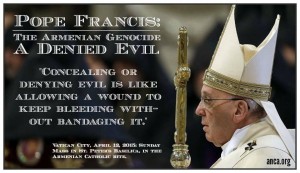 Like countless Armenian and Jewish families, the effects of genocide are both subtle and inter-generational in their psychological and emotional impact on survivors and their descendants. Sitting around the passover seder table two weeks ago I was astonished to hear from my mother that she just recently learned the fate of her grandmother, my great-grandmother Jenny Wolff. We had always been told that in 1941, when Jenny went to get her papers in Cologne, Germany to emigrate to America she was taken into custody by police, shipped alone to the Polish ghetto in Ludz, and after that we never knew. We could only assume she died at a concentration camp. It was only last year that the German government finally released historical and detailed data they kept about so many that they killed; and, we learned that on October 30, 1941 Jenny was taken to the Rumbula forests of Riga, Latvia and was shot after digging her own grave. Despite the shock of learning this truth, after 7 decades, our family was finally able to put closure on this chapter of our lives. 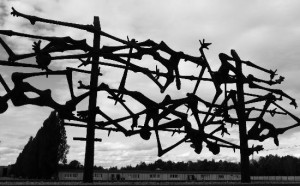 This is why we observe Yom HaShoah and pause to remember. It is why we pause here at La Salle every morning and before every class to remember we are in the presence of G-d. So this morning we will observe Yom HaShoah together. At 10am a series of bells will ring over the loud-speaker and, for its brief duration, we will pause in silent reflection in honor of my great-grandmother Jenny Wolff, and all the innocent people, of all races and creeds who have lost their lives due to war and genocide. 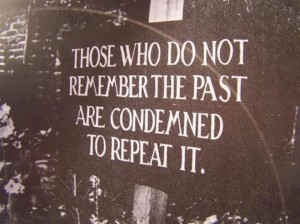 Let us Pray:
Lord, remember not only the men and women of good will, but also those of ill will. But do not remember all the suffering they have inflicted upon us. Remember rather the fruits we have brought, thanks to this suffering: our comradeship, our loyalty, our humility, the courage, the generosity, the greatness of heart that has grown out of this. And when they come to judgment, let all the fruits we have borne be their forgiveness. 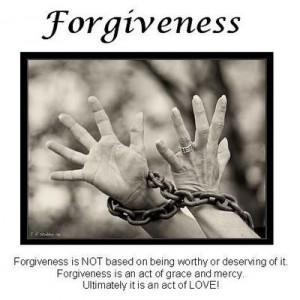 Live Jesus in our Hearts: Forever