Good morning, ladies and gentlemen. Welcome back from Spring Break!!
Let us remember that we are in the holy presence of God.

I don’t know about you, but I know very little about sheep and shepherds—not my experience! However, I did a little research over the past week (Google, not firsthand research) and I discovered that the shepherd in the Near East, places like Palestine and Lebanon, is so keenly aware of each of his sheep that he often doesn’t even need to count them. He is able to feel the absence of any one of his sheep. When a shepherd of Lebanon was asked how he could keep track of his sheep if he didn’t count them, he replied: “If you were to put a cloth over my eyes, and bring me any sheep and only let me put my hands on its face, I could tell in a moment if it was mine or not.” These shepherds really know their sheep individually and often name them. In addition, the shepherd never forcibly drives them as one does cattle, but leads them instead. This does not mean that he is always in front of them; he may walk by their side or sometimes follow behind. And one last fact: Often flocks are mixed while being watered at the well or near a stream. No attempt is made to separate the sheep; when it is time to leave, one shepherd after another will stand up and call out: “Tahhoo! Tahhoo!” or a similar call and the sheep will lift their heads, and after a scramble, each one will begin following its own master. 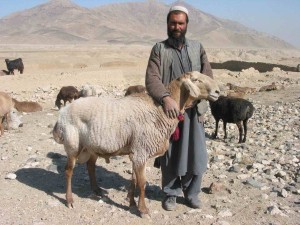 So, Brother,—What’s all this stuff about sheep and shepherds? Yesterday, the Church celebrated what is called “Good Shepherd Sunday” during which the Gospel reading has Jesus proclaiming: “I am the good shepherd. I know my sheep and my sheep know me.” Jesus was not talking off the top of his head or exaggerating—he knew something about sheep and shepherds of his time. O!—shepherds were not the most well-accepted or well-respected of his society; they ranked somewhere with the sinners and tax collectors and prostitutes, but aren’t those the people that Jesus hung out with! Often the shepherd in the family was the youngest son (not trustworthy enough to take over the farm) and the shepherd was, by his very nature, a vagabond, a wanderer—the shepherd was homeless, the shepherd was a migrant worker. And Jesus calls himself a “Good Shepherd”! 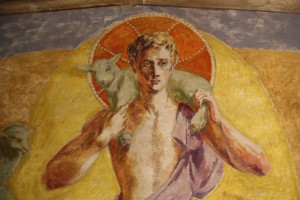 One of Pope Francis’ most quoted lines is that the shepherd must smell of the sheep—the shepherd has to be among the sheep, feeding, nursing, holding, comforting. The Pope is speaking those words first of all to bishops and priests, to leaders in the Church—he is telling them to be a good shepherd in the Church you must be among the people, you must have the mud of their existence on the soles of your shoes (he used to check the soles of the shoes of the young priests he was in charge of to see if they were doing their jobs). 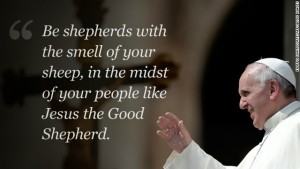 However, these words do not only pertain to Father Najim or to the Brothers or to the school administrators or to the teachers—those with authority. More than that— these words: Be a good shepherd and the smell of the sheep, these words apply to all of us.

Each of us is called to ministry, to service and that call means that we need to know and care for those we are called to serve, to care for them in such a way that we can feel their presence or absence and that they can recognize our voice and respond. That call to ministry and service means that we get involved, get our hands and feet dirty, and not just mutter a few kind words, throw out some money, or even say, “I’ll pray for you” out of politeness.

Last week a number of our community—teachers and students—had an opportunity to learn a bit more about shepherding. There were Mission Service trips to New Orleans 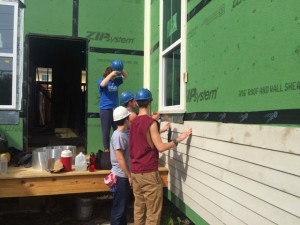 and to the Mexican/USA border near Tucson 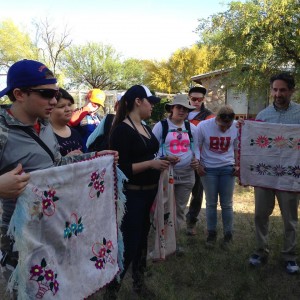 and to the Blackfeet Native American reservation. 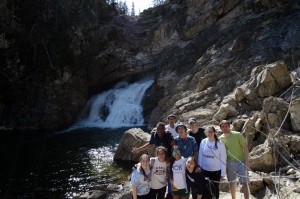 However, even those who were not on distant Mission Service trips might have had the opportunity to be of service, to be a good shepherd—sorting donations for new Moms at Gabriel’s Closet in Pawtucket or feeding the homeless at Amos House in Providence or serving meals to the hungry at the St. Patrick’s, Providence, Kitchen or maybe babysitting a younger brother or sister instead of being with friends, or visiting an elderly grandparent instead of going to the Mall, or spending time with someone not on the top of your popularity list instead of hanging out with the in-crowd.

Over the next few days let’s listen attentively to Morning Prayer and hear what our peers tell us about their shepherding experiences or let’s take a few minutes to read their blog entries. Unlike my Google research—they have some firsthand knowledge. 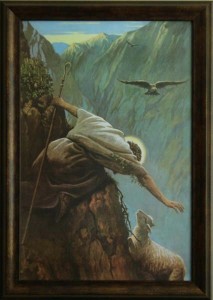 Let us pray:
You, Lord, are my Shepherd. When my own shepherding wears me down, when I am unable to respond to some of the needs of my sheep, you are there for me. You lead me to green pastures to find some rest; you bring me to cool waters. Most of all, you remind me that, as my Good Shepherd, you love me unconditionally and will seek me out no matter how many times I stray away. Though I walk in the valley of darkness I fear no evil for you are always at my side to give me comfort. AMEN.

Saint John Baptist de La Salle…pray for us.
Live Jesus in our hearts…forever.