(Reflections by Four Seniors on Teachers who epitomize the Virtue of Gentleness–completed for Ms. Naughton’s Senior Religion Class) 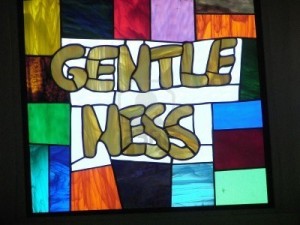 Mrs. _____ is just by far the sweetest, most loving human I have ever had the pleasure to meet and have. One of her best virtues (there are many!) is gentleness. To have the virtue of Gentleness is to be sensitive towards others, tender to everyone’s thoughts and situations, and just be a good person in general. Mrs. _____embodies this virtue and truly deserves any recognition she gets for being an amazing woman. She was never mean to me, once. Like, legitimately, I have never seen her mad. She is so sweet to everyone, even the kids that aggravate her (me sometimes) and she never holds anything against you, even if you have messed up. She will go to the end of the earth to help you excel in her class and she will give you anything you need if she can. Now, I really don’t understand why bad things happen to the most amazing people. I do however know she is one of the most passionate and loving teachers I have had. During one of my rough school years (they are all kinda rough), she was there for me and always listened when I was telling her about things happening to me. The amazing thing about her is that she will always give you help and if you want, a hug :’-). You could be the worst human on earth and I think Mrs. _____ would still manage to like you and help you any way she can. She is like my mom too. I know I can count on her and she knows she can count on me if she needs anything.

Another teacher is Ms. _____.  She was my teacher sophomore year and this year. Her class is one that I enjoy very much. I think that the way she teaches allows her students to really know what the subject is about. I think that Ms. _____ has the virtue of gentleness. In the classroom there are many kids who like to talk every once in a while and that much talking I think would make a person really upset but everyday she calmly asks for silence or waits. I see her in the hallways all the time and when she sees me she always says hi and she remembers my name. These are small ways of showing gentleness but none the less it shows it. She also shows gentleness in the way that she treats the students. There are some topics in _____ that not everyone agrees on and when someone disagrees with others she allows them to. Some teachers would try to perhaps sway the child in the direction they think is right. However Ms. _____ allows the person to know what she believes and she makes people feel as though it is okay to say what they think in the class. I feel as though Ms. _____ is one of the those teachers that if I needed to talk to her about something I could go to her.

Mrs. _____ was yet another teacher that I’ve had during my career as a student that exemplifies a particular quality on this list. I had her for both freshman religion as well as half a year of sophomore year, which focused primarily on the Old Testament. It is throughout this year and a half long relationship that it came to my attention how gentle of a person she was. Everything she said and did was executed with the kindest demeanor you will ever see. This is not to say that she was afraid to reprimand her students. In fact she did this quite often. Many members of my class were rowdy and arguably disrespectful. I was among them. It wasn’t rare to see me after class with Mrs. _____, being disciplined because of my childish disruptions. Never once throughout our 18 month tenure did she ever break in her gentle way of speaking. She disciplined her students, but in the kindest possible way. It was almost the way that a mother would reprimand her kids, but at the same time, not nearly as creepy as the way that analogy sounds. She never forced her students to learn, but we eventually got to a point that we listened simply because we didn’t want to upset such a kind woman.

When discussing the virtue of gentleness, the first person that comes to mind is Mrs. _____. I never had her as a _____teacher, but she was my freshman homeroom teacher. At the beginning of my time at La Salle, things were very difficult outside of school and I needed someone to lean on in my time of need. I found that person to be Mrs. _____. She was there and has been there for all four years of my time here, giving me the right advice I need— “judgements without harshness or emotion.” She never judged me for the things that I know she had never experienced and she spoke to me like I was equal to her despite her supposed superiority. She has always been a friend to me and made sure that I survived my difficult yet exciting four years at La Salle. Without Mrs. _____, I would have most likely transferred at the end of my freshman year when I had doubts about this school. She supported me and never once did I feel a judgement or a negative vibe from her. Mrs. _____ is a very good woman at heart and I know for a fact that this is universally known in the La Salle community