(Reflections by Eight Seniors on Teachers who epitomize the Virtue of Generosity–completed for Ms. Naughton’s Senior Religion Class) 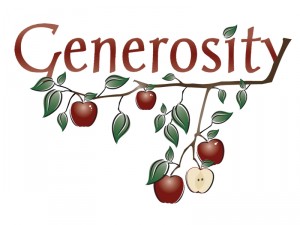 Mr._____ is one of the most generous teachers I think I have ever had. I cannot think of any other teacher who supplies all his or her students with Hershey kisses and cough drops at all times. He also buys about fifty boxes of Girl Scout cookies every year from his students, and then he keeps them in his closet and gives his students a snack in class. Not only does Mr. _____ sacrifice his own hard earned money, but he also sacrifices his time. I love going to Mr. _____ and just talking to him, and he always
loves to hear about my pretty much nonexistent love life. I remember one time I had this big issue and I went to Mr. _____ right away because I had to tell someone because it was bothering me so much. He listened the whole time and gave me genuine advice which I appreciate so much. I also love hearing his wacky stories. Mr. _____ also writes countless amounts of college recommendations for his students. He could easily say “No” to a student because he has too much on his plate, but nope, he writes every single person one who asks and he has never once complained about it. Even over the summer I needed him to write me a recommendation for a summer college program and it was super last minute, but he still wrote me a fantastic recommendation. Mr. _____ definitely devotes himself to his students and I think (at least hope) that he enjoys it.

Mr. _____ is a great example of generosity. He is one crazy guy, in and out of the classroom. Although I have never actually had him as a teacher, I stop by his room one or more times a day. However, I have known him for eight years from Pep Band- four years when my sister was in it and another four when I was in it. He has been leading the Pep Band for over ten years now and has never missed a game… ever (except for that one time). Mr. _____ goes out of his way to book gigs for us at different college events and in parades because we all love Pep Band so much. He voluntarily gives up so much of his free time to do something that we all enjoy doing. He often mentions that he misses his family when he is at the games but says that we make up for it since we have so much fun together. Every once and a while, we can get Mr. _____ to play his guitar along with us or dance around with our mascot, Arpeggio Scales the Salmon. If dancing with a fish doesn’t show dedication to his job, then I’m not quite sure what does.

Ms. _____ is a great example of generosity. Many kids don’t get the opportunity to personally know Ms. _____ but when they do, they grow to love and appreciate her. Personally I call Ms._____ “Mom”. I know that my school mom would do anything to help me out and is there for me whenever I’d need her whether it be to talk or do me a favor. She willingly does things for people and sacrifices a lot of her time for this school and for her kids. I know Ms. _____ mostly through Student Council. “Mom” not only runs Student Council but she truly cares and wants the Council to succeed within the school. When kids slack and don’t do their jobs on the Council she does the tasks. There are days where Mrs. _____doesn’t get home until 9 or 10 o’clock because she’s after school doing events for the student body. Though she is often overlooked, she puts a lot of work into this school, and knows all.

Lastly, my longtime coach, Mr. _____, has the virtue of generosity. In the slide describing generosity in the PowerPoint, a particular definition that stood out to me immediately was “Great sacrifice for the kids.” This is a perfect explanation of Mr. _____’s coaching ethic. He is by far one of the most dedicated people I have ever seen, and it is obvious that he genuinely cares about his athletes and truly wants them to succeed. Whether it was being at practice on time every Saturday at 9am for four straight years, or making sure he got us Popsicles after a long run during the summer, Coach _____ always made a concerted effort to better his athletes, and fortunately, his dedication paid off this year, as we were able to win the State and New England titles.

I can remember back to my sophomore year coming in as a transfer student and adjusting to my new classmates and teachers. For the most part I was excelling in all of my classes, except_____. I remember going for extra help the day before a test, and failing it miserably the next day. But Mr. _____ saw how hard I was working and was always available when I needed help. After struggling for the first quarter he felt that it would be best if I moved down to .2B. When he first told me, I was a little apprehensive because I felt really embarrassed, meaning I could not handle .2A so lets make it easier? When I expressed my concern, he explained that I had nothing to worry about and that the whole world is not made up of .2A people. I will never forget the analogy he gave me, “Think of the point levels as making up a house. The .2A people make up the windows, while the .2B people make up the foundation and structure of the house.” When he told me this I felt a lot better about myself. By the end of second quarter I had an 89 average and I ended up with a 92 average for the year. Switching point levels was by far the best decision I could have made. I am so glad that I had the opportunity to have had Mr. _____ because he represents the virtue of generosity. There is absolutely no doubt in my mind that I would not have done well in the end had I not had him as a teacher. He was always available for extra help. By the end of year he could pretty much read my mind when I was not sure how to do a certain problem.

Miss _____ carries out the most generosity I have ever experienced from a teacher. She is yet another outstanding teacher who is understanding and considerate of others’ lives. I never met Miss _____ until this year and I’m glad I chose to take her class. When a student falls behind in class, Miss _____ will allow them as much time as they need to make up what they are missing. Even when there seems to be just a personal problem or the student just had a bad day and couldn’t focus on their work, Miss _____ gives them additional time to hand in the assignment. Miss _____ always goes out of her way for us whether it be to extend a deadline when students have a lot on their plate, or bring in pizza and put on a movie for us last period on a Friday. She is just an all around generous teacher, and La Salle is fortunate to have her on their faculty.

Ms. _____, a _____ teacher here at La Salle, models the virtue of generosity in her everyday life. As my freshman year _____ teacher, she generously gave us extra time to prepare for tests as well as allowing us students to work with one another. By working with one another we were able to help each other with problems and communicate about different ways of solving a problem. Ms. _____ also models the virtue of generosity in her involvement of the Best Buddies club here at La Salle. When advising the Best Buddies club, she generously lets us have meetings in her room twice a month and gets here early just so that we are able to have them. She gives up her time to make sure we get everything necessary done and occasionally checks in on us at Meeting Street School. Her virtue of generosity shows through everything she has done to make the Best Buddies program the best it can be. Her dedication and generosity has helped improve the club tremendously. It has grow from ten students to one-hundred. Overall, all of these teachers model their virtues in their everyday life.

A teacher that demonstrates the quality of generosity is Mme._____. First off, she gives us super cute stickers like all the time.  It’s fantastic. Whenever she can, she finds an opportunity for us to eat French food. Before the AP exam she gave us each our own animal pencil topper to be our supportive lil friend during the exam. Also before the AP exam we had a mini French party in Campus Ministry complete with sparkling cider and French-speaking. Besides providing us with food (I care a lot about food, though…) she also tries to make projects that are as enjoyable as possible and she has a very fair grading policy with opportunities for extra credit. She is really generous in how she tries her best to have us not only succeed in _____ but have a pleasant time while doing so, by relating the French-speaking to topics we care about