Good Morning, Ladies and Gentlemen.
Let us remember that we are in the holy presence of God.

Fourteen years ago today, almost at this very time of day, four airplanes were hijacked on the East Coast, in mere minutes crashing into the Twin Towers in New York City, the Pentagon in Washington, DC, and a field in Pennsylvania. Most of you students have no direct memory of this—maybe you saw pictures or have learned about this day at home or in school; some of you were not even born. For those of us who lived through that day, images and deep emotions are seared into our very persons. 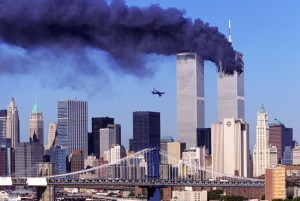 Not long after that day when fears and anxiety were still running high, I heard a story—a Native American story about a grandfather who was listening to his grandson’s fears.

“How do we respond to this violence?” the boy asked his grandfather.
“Grandson,” the wise elder said, “I have two wolves living in my heart. One is anger, vengeance, and violence. The other is love, compassion, and patience. Whichever of these wolves lives in me will determine how I respond to any given situation.”
“How do you choose which one lives?” the grandson asked.
“The one I feed,” the grandfather replied. 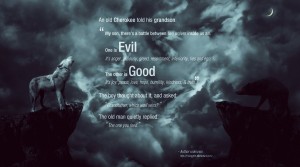 Each of us the potential to bring life to another and each of us has the potential to drain life from another. We might not be international terrorists who hijack airliners to fly into buildings or who indiscriminately bomb in order to inflict the most carnage; we might not be domestic terrorists who murder members of a Bible Study group at the Mother AME Church or who go into a movie theater and let loose a fusillade of bullets; however, we can and do create terror if we so choose. Some of us may terrorize by bullying—not in the schoolyard but over the Internet as we spread rumors about another, making the other fearful of living life among friends. Some of us may terrorize by emotional blackmail—not allowing the other to have a life of his or her own. Which wolf do we feed?

We are acquainted with the expression that “anger eats away at us.” Once we feed the wolf of anger, vengeance, and violence it is difficult to break out of the cycle. I seek revenge from you; you counter to seek revenge; and on and on. Not long ago I felt very discouraged as I saw in the newspaper the picture of people mourning the death of a young man who had been murdered, standing outside the funeral parlor and embracing each other in sorrow, but wearing the colors of the gang of which he had been a member—clearly the murder itself had been gang-related. And clearly the cycle will continue; revenge and getting even for that death will inevitably lead to the death of another—vengeance and violence eat away at our neighborhoods. We see this in our very own city! Which wolf do we feed?

I believe that the night before Jesus died he faced the two wolves within himself—the one that was tempted by anger and vengeance and violence and the one that had lived in love, compassion, and patience. Jesus’ experience in the Garden caused him so much anguish that he sweats blood. However, in his last hours it was clear the wolf he chose to feed: he admonished his disciple to put away his sword; he faced the degradation of whipping and being crowned with thorns with dignity; he forgave the sinner next to him on the cross. Which wolf do we feed? 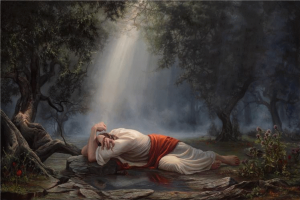 Each of us makes choices each day—to strike out in anger or to reach out in love; to speak a word of curse, to speak badly of another, to ignite a rumor or to speak a word of blessing, to affirm another, to encourage another; to denigrate another because of color of skin or family or town of origin or sexual orientation, or to accept difference, to show compassion, and not be controlled by our fears. Which wolf do we feed? Which wolf will we feed today?

Let us pray: On the night before you died, brother Jesus, you asked us to follow your example of service and you gave us the great commandment of love. You reminded us that life is stronger than death, love stronger than hate, forgiveness stronger than revenge. Help us today and always to feed the wolf within us that is love, peace, forgiveness and compassion. AMEN.

Saint John Baptist de La Salle…pray for us.
Live Jesus in our hearts…forever.

One thought on “Which Wolf Will You Feed?”