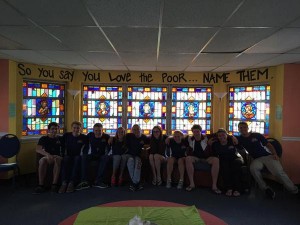 Jace: Marvin from New Visions, a homeless drop-in center, is a man who would ask you to pray for others even though he didn’t sleep in a bed last night.

Emma: Carl from St. Bart’s Day Care is a young boy who was so willing to give us all he had, even though he had so little.

Eliza: Preston from St. Bart’s Day Care would cling to people because all he wanted was some attention and love.

Sean: Sister Julie from the Romero Center is a woman who dedicates her life to empowering others to make Camden better.

John: Miss D from St. Bart’s Day Care is a woman who dedicates her time and energy to the development of children in Camden.

Silvio: John at Hope Works provides the youth of Camden with the skills to begin a career and change their lives.

Taylor: Cathy at Generations Plus, an adult day care, is a woman who treated us not like volunteers but as friends.

Michele: Melissa at Generations Plus wrapped me in the tightest hug I had ever received before I could even say hello.

Sienna: Belinda from New Visions is a woman who was so quick to give us her address because she just wanted a friend to keep in touch with.

Sienna: Learning someone’s name is the first step in starting a relationship with them. Today we challenge you to start a relationship with the poor and name them. For example, everyone knows Joe by Dunkin donuts, yet no one reaches out to him or says hello.
Let us pray: Dear Lord, bless all of the people who touched our lives in Camden. Allow us to be as open and loving as they were and to remember to always keep them in our thoughts. Help us to remember to always name the poor. Amen.
St. John Baptist de La Salle: Pray for us.
Live Jesus in our Hearts: Forever.