Let us pause and remember we are in the presence of God.

This coming Sunday we will hear one of those gospels that doesn’t sound like Gospel to the ears of many people. The Good News for this Sunday comes from Mark and, in it, we hear that Jesus is approached by a young man who kneels down and says, “Good teacher, what must I do to inherit eternal life?” Jesus responds by rattling off the commandments about lying, cheating, and killing, and instructing the man to follow them. “Teacher,” the young man responds, “all of these I have observed from my youth.”

You see, this young man is a pretty good person. He was upholding the letter of the law as outlined by Moses, which governed most every aspect of a Jewish man’s life at the time. And, we can imagine, he is probably relieved to hear from this holy man, Jesus, that he has what it takes to inherit eternal life. Follow the commandments? Check, check, and check. Maybe he celebrated by doing the nae nae. But the curtain doesn’t draw shut and the scene doesn’t end there.

Jesus, looking at him, loved him and said to him,
“You are lacking in one thing.
Go, sell what you have, and give to the poor
and you will have treasure in heaven; then come, follow me.”
At that statement his face fell,
and he went away sad, for he had many possessions. 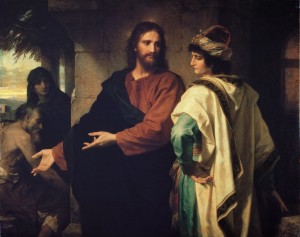 Projected on the board in front of you is a painting by the German artist, Heinrich Hofmann. Known for his paintings of the life of Jesus, he produced this masterpiece, entitled “Christ and the Rich Young Ruler,” in 1889.

The thing I love about this painting, after I get over the insane fanciness of the rich young ruler, is how it captures the true spirit of this Gospel story. When we hear those words of Jesus, “Go, sell what you have,” we automatically start thinking of our stuff. And then we think about selling our stuff. And having no stuff anymore. And being sad. That doesn’t sound like Good News, right? Jesus?

But look at the painting. In the painting the focus, Jesus’ focus, isn’t on the stuff. He’s not pointing at the man’s fine clothes. He’s pointing at an old sick man who seems to need a lot of help. That old sick man is made in God’s image and likeness. And he’s hurting. So when Jesus says what Jesus says, he isn’t speaking theoretically. He’s saying, “Sell your stuff, and let’s use the money to help HIM!” That guy right there! We can’t just ignore him. He needs something and we have it. Jesus’ eyes seem to be saying, “Come on. You can help him.” Notice that the young ruler can’t even look at the old sick man. It seems like he is staring off into the corner, maybe imagining all his stuff. So he walks away sad. He’s walking away from Jesus and back to all his stuff, but he is sad. 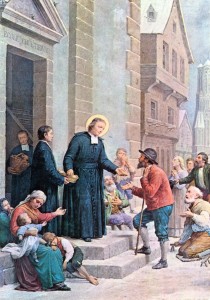 Another painting exists which is very similar to this one. In it, you see an old man who looks eerily similar to the one in this painting – long beard, hunched over, obviously in need of assistance of some sort. He is standing at the foot of stairs which lead up to church doors. All around him are ragged people huddled up. At the top of the stairs, looking down with pity at the old man, is another man, dressed in a black robe, with a long white collar. He had much in common with the rich young ruler. He was born into privilege. He lived a good life and was doing work that people admired and respected. And then he met the poor. This painting shows a scene from 1683-1684 when France suffered from a terrible famine. People were literally starving to death. During that famine, John Baptist de La Salle himself distributed his inheritance, amounting to about $500,000 in today’s money, to the poor through the daily handing out of bread to everyone who needed it. He knew the letter of God’s law, but he also understood its spirit: That we are called to love – a love that can’t turn away from people in need. A love that sometimes requires sacrifice. When people love in that way, my friends, it is certainly good news.