Let us remember we are in the presence of a loving God. 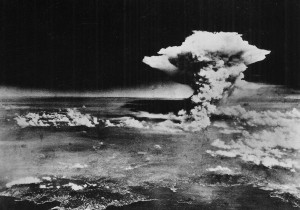 August 6, 1945–an atomic bomb was dropped on Hiroshima. Sadako who was 2 years old at the time, was exposed at home with her family about 1 mile from the hypocenter. The blast blew her out of the house, but she escaped without a burn or injury. Sadako’s mother fled, carrying her daughter. Near Misasa Bridge, they were caught in the “black rain.”

In the post-war Japan, Sadako’s family overcame turmoil and shortages in order to slowly reconstruct their lives. Her father re-opened his barbershop. And little by little, their lives returned to normal. Sadako grew up healthy and entered Elementary School. Sadako was one of the top students in her class and the fastest runner in her grade. 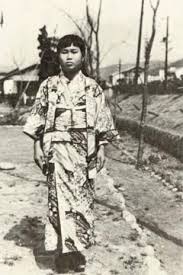 When she was 10 years old, Sadako developed a cold that would not go away. It was determined that she had developed leukemia. Over the course of her stay in the hospital, Sadako began folding paper cranes. After 8 months in the hospital Sadako died surrounded by her family. News of Sadako’s story began to make national headlines.

Sadako’s story and her paper cranes became an international symbol for the Children’s Peace Movement. Students from around the word have been constructing paper cranes over the past 60 years. One thousand paper cranes hung together have come to symbolize a wish for peace, hope and health. Following September 11th , thousands of cranes constructed by Japanese students began to appear on the fences around Ground Zero. This past summer I traveled to Japan with the paper cranes folded by our La Salle community and placed them at the Hiroshima Children Peace Memorial. Across the park from the remains of twisted steel and cement, which mark the buildings destroyed by the atomic bomb, stands a statue of Sadako. Sadako’s statue is surrounded by thousands of paper cranes folded by school children from around the world. The fragile paper cranes show us that the hope for peace outweighs the destruction of the past. 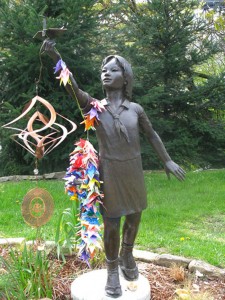 As we end our Lasallian Month of Peace, in the words of St. Francis let us pray: 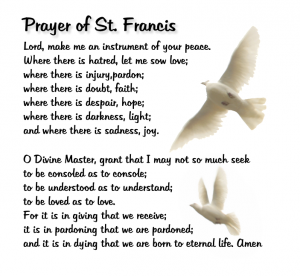 St. John Baptist de La Salle…pray for us
Live Jesus in our hearts…forever. 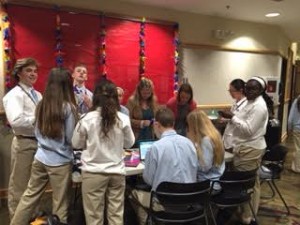