Let us pause and remember we are in God’s holy presence.
A few years ago Mr. Papitto, after many conversations about gardening, gave me a small fig tree to bring home and plant. For two years the tree grew in a large pot which I kept inside in the winter, and moved outside in the summer. At first the tree grew pretty quickly and even produced a few figs, but when it reached three feet tall it plateaued. So in the summer of 2014 I planted the tree in a small corner of my yard. By the end of the summer it was over four feet tall and I had high hopes that it would eventually grow into a fully mature tree that bore good fruit for my family to eat. During the fall I wrapped the tree in burlap and piled up leaves and grass clippings around it for insulation. But then the winter of 2014-2015 came with its record snow and record cold. When the snow finally melted and the weather finally turned, I went out to that small corner of my yard to unwrap my fig tree. It’s brittle branches had snapped off under the weight of the snow. The buds which appeared on the tip of its branches in the fall, giving hope for the spring, had shriveled up. My tree was dead. After years of pruning and watering and caring for that tree, it would no longer bear good fruit. 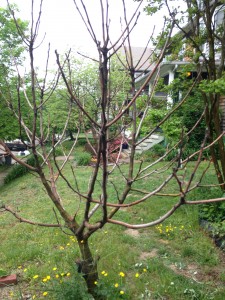 On the board in front of you is “Jeremiah Lamenting the Destruction of Jerusalem,” by the famous Dutch artist Rembrandt. 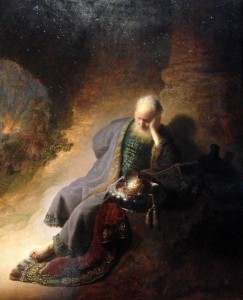 Jeremiah is one of the major prophets of the Hebrew Scriptures and he is recognized as a great prophet by Jews, Christians, and Muslims. He lived in the Southern Kingdom of Judah in the 7th Century BCE, after the Northern Kingdom had already fallen. Called by God as a young man, Jeremiah tried to get the people to stop worshiping false idols, to be a tree that bore good fruit, to live moral lives, to practice justice, and to return to the living God before Judah, and its capitol, Jerusalem, suffered the same fate as the north. Jeremiah’s warnings, however, fell on deaf ears. Jerusalem was destroyed by the Babylonian King, Nebuchadnezzar, and thousands of people were moved from Judah to live in exile in Babylon. Jeremiah had failed in his mission. And it is this realization of failure that Rembrandt captured in this painting. Called by God in his youth, Jeremiah is now an old man. His whole life’s work, like the temple pictured to the left, is going up in flames. He has let down his people. He has let down himself. He has let down his God.

The first reading from yesterday, the first Sunday of Advent, comes from the 33rd chapter of Jeremiah – the very end of the book. While Rembrandt’s masterpiece seems to be bereft of hope, the final chapters of Jeremiah point with hope to a future for the people in exile. Jeremiah spends his final days encouraging the people to hold tight to their faith, to turn away from idols, and to practice the compassion and justice that God desires. And only then, Jeremiah prophecies, will God save them and bring them home again.
“The days are coming, says the LORD,
when I will fulfill the promise
I made to the house of Israel and Judah.
In those days, in that time,
I will raise up for David a just shoot ;
he shall do what is right and just in the land.
In those days Judah shall be safe
and Jerusalem shall dwell secure;
this is what they shall call her:
“The LORD our justice.” 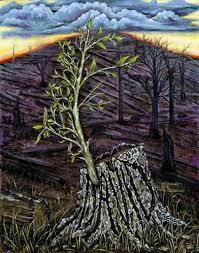 Late last April, after Easter, I was doing some yardwork outside, when I noticed a patch of green in the corner of my yard where the fig tree had been. Out of the dead leaves and dead grass, sprouting from the base of the old dead tree, a new shoot had sprouted. 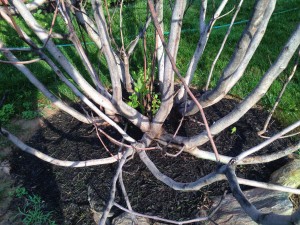 Let us pray.
This is what the LORD says: “Stand at the crossroads and look; ask for the ancient paths, ask where the good way is, and walk in it, and you will find rest for your souls. “ Lord, give us the strength and the desire to walk in these ancient paths, to turn away from whatever false gods tempt us, and to depend on you alone. Amen.
St. John Baptist de La Salle…pray for us.
Live Jesus in our hearts…forever.
Matt Daly–Director of Campus Ministry