This week the La Salle community joins in a district-wide effort to raise awareness of the continued effort to re-build and strengthen the island nation of Haiti following the devastating earthquake of six years ago and to raise funds for the Lasallian World’s contribution to those efforts: The Saint Jean Baptist de La Salle School in Port-au-Prince.
As the week goes on we will hear more about this school and the Women and Children’s Health and Nutrition Center, both operated by our very own Christian Brothers. The week will culminate this Friday with a Dress Down Day. We ask for $5 to dress down, but we really do encourage you to give more – sacrifice a morning coffee or a piece of candy at lunch and donate it – your money will have a very real and very meaningful impact on our friends at De la Salle School in Port-au-Prince.

Let us pause and remember we are in God’s holy and loving presence.

Haiti is the second poorest country in the Western Hemisphere, and its people have wrestled with poverty since its conception in a successful Slave Revolt in 1791 that resulted in a new and independent country. The world stopped and took notice when the natural disaster struck six years ago, but all too often before and after the earthquake, the world has ignored the many man-made disasters that continue to contribute to the peoples’ suffering. 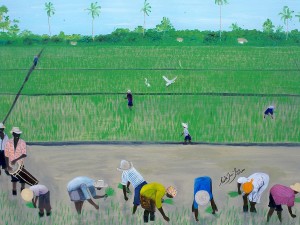 On the board in front of you is a painting “Rice Field Haiti 1980” by Haitian-American artist Nicole Jean-Louis. It depicts farmers in the Artibonite Valley growing the West African variety of rice grown in Haiti for over 200 years. For most of those years Haitian farmers grew rice to feed their families and sold the excess at market for a profit. An old proverb tells us: “Give a man a fish, feed him for a day. Teach a man to fish, feed him for a lifetime.” Haiti was self-sufficient in rice and some other produce until the early 1990s. The country was poor – healthcare and education and infrastructure and industry were lacking, but the country could feed itself and enjoyed the sense of dignity that came with that reality. Unfortunately, this “ability to fish” changed 25 years ago by a man-made disaster that could have been prevented.

As President in the 1990s, Bill Clinton called for Haiti to eliminate tariffs on imported, subsidized U.S. rice, as part of a larger plan to free up trade in the hemisphere. This allowed cheap rice produced in the U.S. to be sold in Haiti, effectively putting rice farmers out of business. It not only undermined the existing food chain, but it also undermined a lot of the culture, the fabric of life, and the sense of self-determination that had existed. In an interview this summer, President Clinton said it was one of his biggest regrets. “It was a mistake. It was a mistake that I was a party to. I am not pointing the finger at anybody. I did that,” he said. “I have to live every day with the consequences of the lost capacity to produce a rice crop in Haiti to feed those people, because of what I did. Nobody else.” Yes, President Clinton has to live with the decision, but so do the farmers who lost their jobs. And their families. And the people of Haiti, who after the earthquake had to rely on donations instead of home-grown food.

Why do I bring this up? Because our decisions have impacts that can ripple through history. Decisions that touch people’s lives in both good and bad ways, with both intended and unintended consequences. Because it reminds us that the best and the brightest of a generation are fallible and often make mistakes. Because some of the biggest problems we face in the world today can be traced back to small decisions made people like you and me. Let’s join together for a week of prayer and action in just a small attempt to make things right. 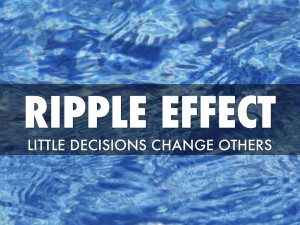 Let us pray.
Heavenly Father, bless the people of Haiti and especially the students and faculty of the St. Jean Baptist de La Salle school in Port-au-Prince. May that school and its students be granted a spirit of wisdom to clearly see a path towards a brighter tomorrow and the zeal to work tirelessly towards a new day.  AMEN.