(Prayer offered on the intranet and the Public Address system for the entire La Salle Academy educational community on Monday morning, 28 March 2016)

Do you believe me? Or do you doubt? 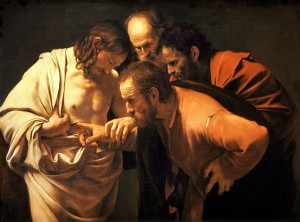 On the board in front of you is “The Incredulity of St. Thomas” by the master Italian artist from the Baroque period, Caravaggio. Caravaggio was known for his realistic portrayals of humans and for his use of light. He was also well known for his religious-themed masterpieces.

This coming Sunday we will hear the gospel story that was the inspiration for this work: the story of Doubting Thomas. Thomas, one of Jesus’ closest friends, was not present when the Risen Christ first appeared to the apostles. When his friends told him the good news, he did not believe them. “Unless I see the mark of the nails in his hands and put my finger into the nail marks and put my hand into his side, I will not believe.” 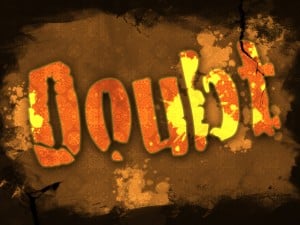 As a result, for the past 2000 years, St. Thomas has been given a fair share of grief. We judge his lack of faith, and we gave him a nickname with negative connotations. It doesn’t matter what he did before – like follow Jesus around as one of his best friends. Or what he did after – journey outside of the Roman Empire to places as far as India, according to tradition, to preach Christ’s gospel. We remember him for that one brief moment of doubt. 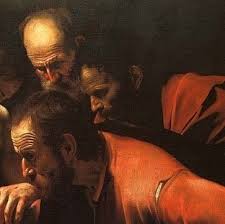 What I love about this painting is that Caravaggio captures something that went unsaid in John’s Gospel, but that I bet was true. And it is an important truth for us today. While it is easy to focus strictly on Jesus and Thomas, with Jesus gently helping Thomas to touch the wound in his side and the expression of awe on Thomas’ face, I like to focus on the two men standing behind them. I don’t know who they are – maybe Peter and John – but notice that they’re not standing off to  the side, disengaged from the action. They are all up in this scene trying to get a good look at St. Thomas as he pokes and prods the Lord. The reason I love it is because I bet the other disciples, even though they were there to witness Christ risen the first time, still didn’t fully believe what they were seeing. I imagine that Jesus caught those fools staring at his hands and feet quite a bit over the next 40 days. And I bet if any of them were not present, that they would have doubted too. And so do we, don’t we? I know that if I believed more fully, more perfectly, that I’d pray more. And I’d treat people better. Judge less. Be more generous and less selfish. But I doubt. I doubt the importance of it all. I doubt my own abilities to enact change. I doubt God’s willingness to help. It’s especially easy to doubt with so much tragedy in the world. 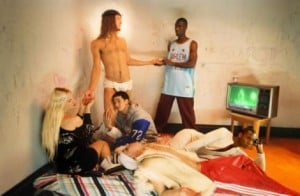 So I try not to judge Thomas. In fact I try to act more like him – look at him! He doubts, yes, but he also explores his faith. He is open to God’s wonder. He puts himself in the Lord’s hands. He’s not afraid of being proven wrong. He cares enough to question. Let’s keep that spirit moving in our own lives this Easter season.

Live Jesus in our hearts… forever.