(Prayer offered on the Public Address system for the entire La Salle Academy educational community on Friday, 13 May 2016)

Sunday, May 15th, is a very important day around the world.  Now, I’ll tell you a little secret: It’s not Mother’s Day (that was last Sunday).  And we might be tempted to say it’s the day of the La Salle Academy Athletic Banquet, but that would not be a reason to celebrate around the world.  We might even know that it is International Families Day (but, to be honest with you, I never heard of that Day).  So what is May 15th?  It is the day on which the Lasallian world celebrates our Founder, Saint John Baptist de La Salle.

On this day in 1950, the Catholic Church declared him the Patron of all Teachers, having named him a saint fifty years earlier in 1900. 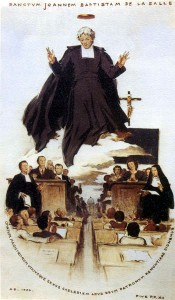 As you know, this saint is pretty special to this school as well—we are named after him; his statues stand at the top of the stairwell near Room 213 and in the Campus Ministry Center; a brief pictorial biography graces the walls of Heritage Hall near Room 111; his picture is in many classrooms and offices; his name is invoked and called upon to pray for us many times during the day.

Now, if we want to know something about him, I suppose we can read his biography, and many of you have as Freshmen, as have our 6th graders—you know how he was born into a wealthy family, became a priest, lost both parents while in his late teens and became responsible for his brothers and sisters; how he helped with a school for poor boys, got more and more involved in helping to instruct the teachers how to best teach; how he founded more and more schools throughout France; how he experienced some successes and many failures; and, how he left a legacy of schools and Lasallians throughout the world.

Or, if we want to know something more about him, I suppose we could read his writings: his Meditations for teachers, his book on how to conduct a class, his instructions on good manners and religious instruction for young people, his letters, and his own reflections on how God called him little by little to do ordinary things but sometimes at an extraordinary price.  Isn’t that the way God calls us—little by little—to be more caring about family members or friends, or more concerned about those who have less?  Little by little, rather than a lightning bolt from the sky—isn’t that how God calls you?  I know that it is how God calls me.

However, I think that if we really want to know something about him, we ought to play detective and look for his spirit, his charism, as it exists right here at La Salle today.  We might want to look for him in our Seniors as they head out for Christian Service each Wednesday, going to help someone who has less than they, or in our classmates and teachers who spend a week of their vacation time not on a beach in the Caribbean but helping to pick fruit or vegetables in Tennessee or Florida or to rebuild a house in New Orleans, or maybe in our Lasallian Youth members here in school, who after school or on Saturdays feed the homeless and hungry—that is St. La Salle’s spirit alive and well.  We might want to look for him in the teacher who patiently helps us to understand a tough concept, or the counselor who is willing to listen to our concerns and put them into perspective, or the administrator who gives us a second chance because he or she believes that we deserve a break—that too is the spirit of St. La Salle in our midst.  We might want to look for him in the Brothers who have committed 50 years or so to being a Big Brother to young men and women at the cost of having no children of their own, much as St. La Salle did, or in the memory of a Brother Jerome or Brother Gerard or Brother Amian Paul who touched the hearts of so many of us.  We might want to look for him in the coach or moderator who spends hours of extra time with us helping us to develop our special gifts, in the secretary or maintenance person who puts in hard hours that this school run smoothly, in the cafeteria workers who serve us and clean up after us, always with a smile, in the alum who has volunteered to help with Youth Ministry in his or her parish to give something back.  If we want to know something about St. John Baptist de La Salle, all we need to do is just look around us with open eyes and open hearts!! 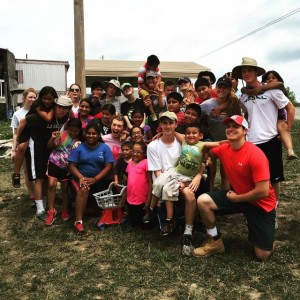 On April 7th, 1719, on Good Friday, John Baptist de La Salle died.  His last words—words that we see every day in large script above us in the center of our Student Dining Room—his last words were: I adore in all things the will of God in my regard.  In other words: I accept all that God has given to me, the good and the not so good; I trust in God’s goodness and strongly believe that what God wants of me, what he calls me to, is what is right for me and for the world; I thank God for all that he has done for me in my life. 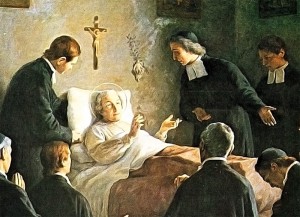 So, let us use his own words as our prayer today:  O God, in all things I adore and honor your will in my regard.  Give me the willingness to listen to your call and give me the courage to answer that call today through a life of faith, service and community.  Amen.