(Prayer offered on the Public Address system for the entire La Salle Academy educational community on Friday morning, 21 October 2016–the final day of the International Lasallian Days of Prayer for Peace)

What a great week to be a Lasallian!  At the beginning of the week we had the canonization of Brother Solomon Le Clercq.  Brother Solomon was martyred during the French Revolution, the first follower of Saint la Salle to be martyred.  His canonization is an important event in our Lasallian world. 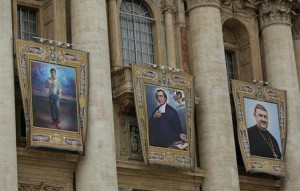 And today as we end the week we come to the final day of the International Lasallian Days for Peace, which began a month ago on September 21.  So this morning we say “yes” to the morning, and we say “yes” to peace. 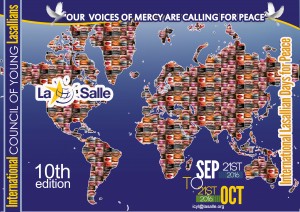 My own involvement with the issue of peace began in this very school in the early 1960s.  Wise teachers introduced me to the work of Dorothy Day and Thomas Merton, two of the great Americans praised by Pope Francis during his visit to Washington.  But in those days the work of these two was not widely accepted.  In fact, in Merton’s case, his superiors in the Trappist order, forbade him to publish work about war and peace. 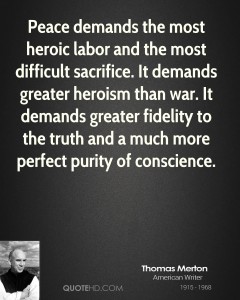 The issue of peace was very much on the minds of me and my friends, and not only because of what we were reading.  There was the Cuban missile crisis, and then the growing Vietnam War, with its daily “body counts.”  It was a time of great tension.  And then there was the draft, with nearly every American family aware that the next draftee could be a son, brother, or cousin. 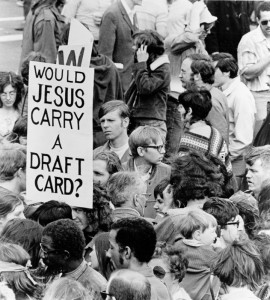 There was also the Second Vatican Council, with a strong prohibition (the Council’s only prohibition) of the bombing of innocent civilians.  The Council Fathers also wrote positive statements about conscientious objection, to which I was being drawn.

After much reading and prayer and thought, I became a conscientious objector, immediately lost my student deferment, and served as an unarmed field medic.

And you, students of the current generation, are also living in a time of war – many wars.  Yet it seems so easy today to keep the problem of war at arm’s length.  Not so much tension here at home.  No draft.

Let us try to keep the tragic violence of war on our minds – today, and all days.  Let us be peacemakers, in our families, in our classrooms, on our playing fields.  Let us find ways to live in solidarity with the victims of war and other violence, through prayer and hospitality and almsgiving.  And we must not forget to pray for, and try to love those who do violence, who wage war.  This Jesus commanded of us.  These sincere efforts will help His Kingdom come. 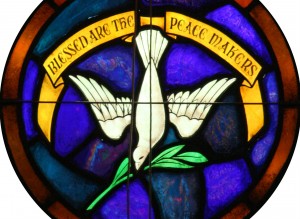 Creator God, we, your creatures, are often proud, and weak, and lazy.  Help us to find the humility, the strength, and the vigor to be peacemakers, and to be your loving presence in our messy world.

Live, Jesus, in our hearts. Forever!