A Personal Remembrance of Sam Jenkins

1 April 2017—A Celebration of the Life of Sam Jenkins 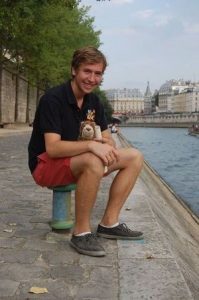 It was early in the first semester of the school year, Autumn of 2012—I am not sure of the exact date—but I am sure of the exact spot—a couch in the center lounge of Campus Ministry at La Salle Academy, that I met Sam Jenkins.  I know it was not the first time I had seen him in there as I passed through the space regularly for a few quiet moments in the Blessed Sacrament Meditation Chapel, but I became curious about this young man working diligently by himself on some school work—pen in hand and open book, no cell phone distractions.  In meeting for that first time Sam told me that he had transferred, that he had taken the Sophomore Religion course as a Freshman and that as a Sophomore at La Salle he was doing independent study using the Freshman Religion text.  As the conversation progressed he mentioned that he played hockey—was a goalie—and immediately I realized that I would be spending some time with this young man over the next few years in one of my roles at La Salle—that of Boys’ Hockey moderator.

Indeed I did spend time with Sam over those next three years and got to know something about him—how he was really bright (since I never had to call him into my office to talk about poor grades); how he was a young man of many interests—a young Renaissance man—who could move easily from the hockey rink to the Chorus Room as a member of Men’s a-Capella chorus, to the stage as a player in Othello, to the computer lab, to the English classroom and the debate team; how he had a perpetual smile, a cheery word, a firm handshake every time we greeted each other (sometimes a few times a day) as I engaged in my ministry of the hallways being present before and after school and between classes.

However, what I treasure more than knowing about Sam was coming to know Sam.  I discovered a young man who was comfortable in his own skin (on dress down days when students could be out of dress code, Sam would invariably appear in brightly colored or pastel shorts and shirts or with lounge pants with little boats or watermelons on them—a declaration by Sam of his individuality).  I discovered a young man of great loyalty and fidelity—never the starting goalie, Sam never complained about being a back-up or a 3rd or 4th string goalie; he was at every practice whether early in the morning or late in the evening doing what his coach asked him to and filling in whenever or wherever needed; even during his Senior year he was at almost every game and frequently in the locker room cheering his team mates on as they won the State Hockey Championship.  I discovered a young man who valued community—be it his family community so clear in his pride in his younger sister coming to La Salle or the school community itself.  One day early in the second semester of his Senior year he appeared at my office door (a frequent occurrence) and sat across from me excited to share with me the news of his choice of college—a massive search and plenty of open doors for him.  He proudly said, “I found a place like La Salle—small, a real community, a place where I feel I can belong—Swarthmore.”  And at Swarthmore he did indeed find a community where he could both fit in and be himself.  And finally, I discovered a young man of profound depth, great sensitivity, and deepening spirituality.  Later in that second semester of his Senior Year Sam came up to me in the corridor and announced, “I am thinking about becoming a monk!”  Quickly in my mind I am thinking—a Brother?  A Trappist monk?  He must have seen the pensive look on my face and said, “A Buddhist monk!”  I am sure he saw surprise flash on my face but the conversation ended there and he went on and I thought—how appropriate!  Sam loved the outdoors; he was an environmentalist.  Sam also loved the big questions.  Buddhism, which he was studying that semester, was a way for him to join in an organic whole the outside world and the inside world.  I never saw him in a saffron robe but it would not have been far-fetched.

Over the past year and one half that he has been away in college his frequent return visits (three times over the most recent Christmas break) revealed to me that Sam was continuing to grow—as someone secure in who he was, as a loyal and faithful friend, as a person who treasured family and community, and as a young man who had not lost his gift of deep reflection.

La Salle Academy will miss Sam—La Salle is more than bricks and mortar, more than alums returning to reunions; and, Sam will continue to be remembered as a treasured member of our Lasallian Family.  The Boys’ Hockey Program will miss Sam—forever he is a part of that team that broke the 38 year drought and that will never be forgotten!  And I will miss Sam and his on-going friendship.  Sam may be gone but there is a part of me that will continue to be touched by Sam’s eternal spirit.

I won’t say “Sam, rest in peace”—much too passive for Sam.  Rather, “Sam, continue to live—now and forever in the loving presence of that God whom you sought.”