For those of you thinking of having your hearing checked, I can assure you it’s me, and NO 10 years hasn’t passed.  So what has made a liar out of me you ask?  Two different but related words. Opportunity and Excuses.  I was given a second opportunity to address the entire Lasallian community, and I could have given Mrs. Estes any number of 1,000 excuses I’ve accumulated over the years, all of which believable but all of which would have been a lie.  So which is worse? Lying to you that I wouldn’t do prayer for another 10 years or lying to Mrs. Estes about doing prayer today?  Obviously, I decided to embrace this opportunity even though it’s not something I enjoy, rather than make an excuse. 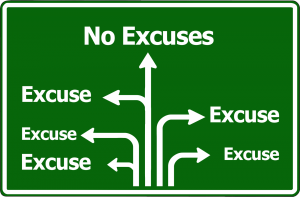 Now there are a lot of sayings and comparisons about what excuses “are like”…We’ve all used them, made some up, borrowed a good one from a friend, and it most likely got you out of something you didn’t want to do.  We took a shortcut, or an easier path.  I heard a great quote recently while watching “Racing Extinction” (an environmental movie) but I think it can be applied in everyone’s lives.

“It is better to light a single candle than curse the darkness.” 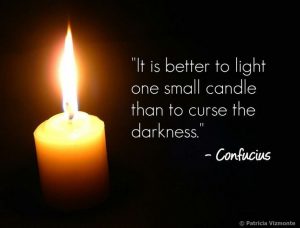 As someone who does quite a bit of swearing this resonated with me.  I’ll spare you from any political, environmental  or social examples.  But perhaps your sports team, your club or even your friends need more light and less excuses.  Whether you know it or not, every single student in this building is someone’s light, your parents.  You probably think your parents were put on this earth to ruin your social life, embarrass you and take your phone away!  Well let me leave you with this story: A dear friend of mine whom I went to high school with, sat at my lunch table, shared a limo to prom, shared a position in football and talked on the phone till all hours of the night when his girlfriend dumped him… I think you get the picture.  After high school we drifted apart, we lost touch, and he disappeared.  (This is before cell phones and social media mind you) Recently, I’ve reconnected with him, only to learn that within 4 years of graduating HS, he was homeless and a drug addict. (Let me clarify, Not just did drugs, but did so much drugs he lost his football scholarship, dropped out of school, didn’t pay his rent or bills and got evicted from his apartment.  He lived in shelters and on the streets for for the better part of a year, and he was too proud to tell to his parents or friends).  When I heard this I was speechless, and as a friend I was ashamed I did not know.  But he is very open about his experiences and in what he calls his darkest hour (A time so dark, he contemplated suicide) he met someone.  Someone who believed in him (his candle, a single light).  Shortly after he learned he was going to be a father and there was his second light.  He cleaned himself up, got a job, married this woman, bought a house and has a beautiful family.  It would have been easy for him to continue to make excuses, but in his words, he wanted to be a good example to his children.

Which reminded me what our Founder wrote in his meditations: “Examples make a much greater impressions than words.” And to put it bluntly as my friend Brian would say all the time… Don’t just talk the talk, walk the walk.  I hope none of you ever finds yourself in the darkness that Brian did. 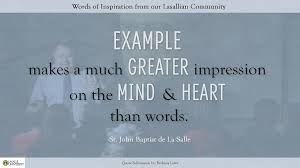 God, help us to remember that our actions speak loudly.  When we are tempted to make excuses, help us to dig deep within ourselves, and step up to the opportunities at hand.  Thank you for the many lights in our life.  And help us to be a light for someone else today.

Live Jesus in our Heart: Forever!