In 2001 I was a newly-minted teacher looking for a job. I put my name on sub lists at all the local schools and had some interviews that summer. As September rolled around I was still unemployed. And then I was hired for a long term sub position at St. Raphael Academy. Now understand that I am not a native Rhode Islander.  Living first in Newport and then Tiverton, I am pretty sure I had never been to Pawtucket. I had never heard of St. Ray’s and I most certainly had no idea who St John Baptist de La Salle was. But it was a job and so off I went.

Now the life of a sub is such that someone shows you a classroom and says ready, set, go!  And you just hope and pray that your education has prepared you to teach. I was, however, not prepared to learn. On day two, a student said to me, “Mrs. Chapman we are supposed to pray.” Oh, of course… I’m in a religious school. So the next day I had a prayer. Then a student says, “uh… Mrs. Chapman you are supposed to say ‘Let us remember we are in the Holy presence of God’.” So I did then read my prayer. Then I hear…”uh, Mrs. Chapman what about the end? The response prayer? St. John Baptist de La Salle… Pray for Us.”  I got it right after a few tries and the students and I laughed together but truthfully I was still so confused. Who was I asking to pray for us? I kept messing up and saying John the Baptist. And who are the Christian Brothers anyway? I was clueless. 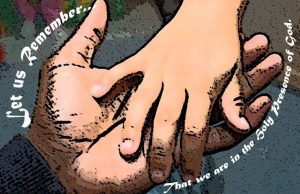 As fortune would have it when my sub position ended, a job opened up here at La Salle. As Mr. Kavanagh gave me a tour I noticed how clean the building was—how Mr. Fortin shared all his teaching materials with me even if they were from the 1950’s—how Mr. Skelly made me laugh every day. And although I still had no clue who St John Baptist de La Salle was, and I was still pretty fuzzy regarding the Christian Brothers, I stayed. 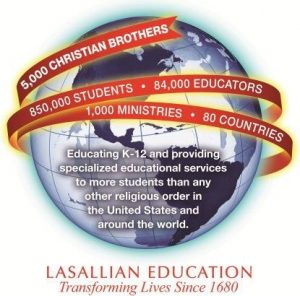 I did eventually learn the history and mission of La Salle. But learning and understanding can be very different. I was part of something so much bigger than just the buildings of the academy. It’s bigger than a button down, a tie, a gray skirt. It’s bigger than me wearing my ID, chaperoning Harvest Ball, or grading DBQ’s. It’s about community and respect and a million other things you don’t realize until much later. It’s former students who get married in the chapel; it’s former students who come back to teach; it’s students who become Lasallian volunteers, or who leave La Salle ready to serve the bigger community. Our community is easy to take for granted but the culture of care and respect is everywhere. I challenge all of us to look beyond the immediate to see the bigger picture that is La Salle. 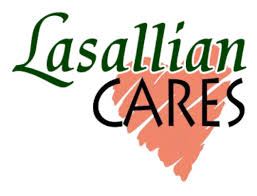 Let us learn to love our neighbors more deeply, so that we can create peaceful and just communities.

Inspire us to use our creative energies to build the structures we need to overcome the obstacles of intolerance and indifference.

May Jesus provide us the example needed and send the Spirit to warm our hearts for the journey.

—adapted from Being Neighbor: The Catechism and Social Justice

Live Jesus in our Hearts…Forever.