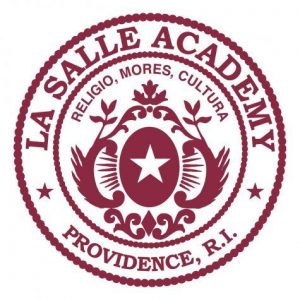 Your Excellency, Bishop Evans; Brother Thomas; Mr. Kavanagh; Representatives of the Diocese and the Brothers of the Christian Schools; Members of the Board; Faculty; Alumni; Parents; Guests; and fellow members of the graduating Class of 2018,

Growing up in New England has cultivated within me a longing to be by the water. Many would assume that I’m drawn there during the summertime, when the waves are crashing and the sun is beating down, but that is not the case. I love to be by the water during early to mid Fall, when all you can hear are the waves slowly brushing up against the sand. The water commands me to stop and reflect, then after awhile, I begin one of my favorite pastimes – skipping rocks. As a girl with little hand-eye coordination, my first time skipping rocks did not go well. However, as a girl who is also the textbook definition of inquisitive, I decided to look up not just how to skip rocks, but why rocks even skip on water.  About one hour and five articles later, I learned there’s a whole lot of physics behind it, that we don’t have time to go into tonight, but I did learn one thing about skipping rocks that has stuck with me. I discovered that every time the skipping stone hits the water, it hits it differently. Not only that but each time it bounces off of the water, it points upward, ready for its next bounce. Once I realized this, I could not help but think about the history of La Salle Academy. So tonight as we, the Class of 2018, get ready for our “next bounce,” let us reflect on those who came before us and most importantly the man who initially decided to pick up the rock – St. John Baptist de La Salle. 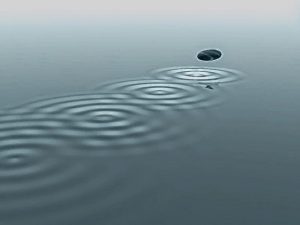 Prior to walking the halls of La Salle, many of us had a vague idea of the history and the legacy of La Salle Academy. During our early years here, we were educated on the life of St. John Baptist de La Salle, our founder, who was devoted to cultivating and educating the minds of young people with a special focus on service and compassion. We were educated on the mission of La Salle Academy – to unite men and women of diverse backgrounds in the pursuit of faith, service, and community. We were made aware of the people who had come before us and how they had left an imprint on La Salle. We were made aware of the wonderful facilities at the school due to the generosity of alumni and benefactors. We were
made aware of La Salle’s commitment to faith and service. We were made aware of everything relating to La Salle … well, almost everything. There is one thing that we were not told but had to learn through experience. La Salle Academy Class of 2018, the bonds that we have formed, the relationships we have nurtured, the tears that we have cried, and the laughs we have shared, sometimes when we were not supposed to, have all laid the foundation for a class that none of us could have ever imagined; nor will we ever be able to forget.

Coming to La Salle for many of us was a no-brainer, because of the school’s great reputation. However, as an incoming freshman, I was hesitant. Transitioning from a small, private middle school with a graduating class of 23, to La Salle was a dramatic change. Entering high school was a major skip against the water in each of our lives. We were all coming from different schools, each of us with different interests and talents; a multitude of differences, yet one thing in common – we had all chosen La Salle to be our new home for the next four years. As I conversed with my new classmates, I was left in awe of our similarities and also our strikingly different interests. This class was continuing the tradition of not only academic excellence but we were also continuing to cultivate a community rooted in faith and service. Regardless of how we all got here or what our driving force was for coming to La Salle, God had a plan for each of us. 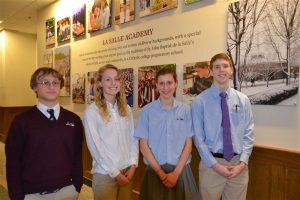 La Salle has a funny way of taking the person walking into the school for the first time, and turning that person into the individual they were meant to become. The administration and faculty at La Salle believe in the idea that life begins at the end of your comfort zone and true growth comes from pushing yourself to do things that you had never imagined. Tonight, we are who we are, because of them. Therefore it is important to take a moment and appreciate the administrators, faculty, teachers, campus ministers, guidance counselors, and of course, our dean, Mrs. Richard for helping us grow into the young men and women that we are today. We cannot forget to thank our parents for the indescribable love that they have shown and continue to show us everyday. Over the years, they have not only supported us in our dreams, but have also carried them as if they were their own. They were our first teachers, our first coaches, our first directors, and they will always be our biggest fans. Tonight, as we are filled with gratitude for our administrators and faculty, let us, in the same way, be filled with appreciation for our parents, without whom, we would not be here today.

La Salle Academy is not just a building with four walls, it is the people who have walked, are walking, and will walk within its halls. It is the dedication of the administration and teachers to the education of young minds. It is the devotion of the campus ministers to serving the community. It is the loyalty of alumni to not only give financially but to give of their time. It is the freshman, sophomores, and juniors who will be continuing their education as we depart. It is the incoming freshmen who are unaware of the amazing memories they are bound to make. Four years ago, we were chosen and chose to come to La Salle Academy; the faculty and administrators believed that we would flourish here, and because of their faith in us, we have had some of the best years of our lives. Regardless of how far we are going for college, whether it is on the West Coast or right here in Providence, the Lasallian legacy remains with us.

That’s the thing about La Salle Academy, yes it is important what you do throughout your four years at this school, but it is equally as important what you do after. When I think of the endless possibilities for this class in the future, I cannot help but be filled with excitement for what is to come in each of our lives. I see our next bounces leading to lives dedicated to medicine, business, music, politics, art, teaching, and so much more, but what I see in all of our futures is a life rooted in the beliefs instilled in us at our home for the past four years on the corner of Smith and Academy. Each bounce prior to tonight has laid the foundation for us, and now it is our time to continue the tradition of past graduates. St. John Baptist de La Salle initially picked up the rock and it has bounced from France to Rhode Island. It has bounced through 147 graduating classes, and right here tonight, to us. So tonight, as we sit here, ready for our next bounce, let us reflect on the past four years we have spent at La Salle and let us look forward to the Lasallian legacy we will have the privilege to create.