Today in Sweden, girls all over the country will dress in white dresses and wear wreaths of candles on their head (yes, that’s right, some little girls use electric candles, but older girls will wear wreaths of real candles on their heads!).  They will visit friends, family, schools, hospitals, nursing homes, and pass out traditional Swedish Christmas foods and spread holiday cheer. This tradition is not as well known in the United States, but as a little girl growing up with a Swedish mother, I remember that we always had a special dessert at our house on December 13. 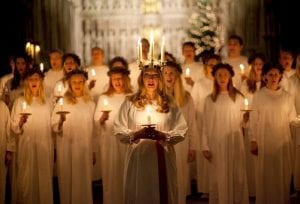 Why?  Well, December 13 in the feast day of Saint Lucy, a Roman girl who lived around the year 300 A.D.  In a time, not unlike today, when it was difficult and unpopular to live according to your faith, she pledged her life fully to Christianity, refusing to be married and asking her parents to donate her dowry (the money that a bride’s family used to be required to give to her new husband’s family when they were married) to the poor.

There are many stories about St. Lucy, two of which are important for us today.  The first is that St. Lucy would secretly bring food to the persecuted Christians in Rome, who were living in the catacombs, a huge maze of tunnels and caves underneath the city, because they could not worship God openly.  To light her way, legend has it that St. Lucy wore a wreath of candles on her head as she made her visits. In her charity, she literally brought light to the darkness of these people’s lives. This is, of course, the origin of the present day tradition in Sweden, one of the high points of their entire Christmas season. 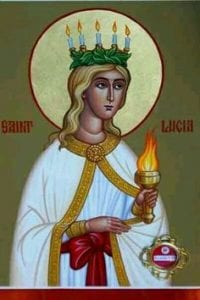 The second legend is that St. Lucy had particularly beautiful eyes, and that when she was eventually martyred for her faith, her eyes were ripped out as part of her torture, but restored by God just before her death.  For this reason, St. Lucy is the patron saint of both light and eyesight, especially blindness and other eye problems. 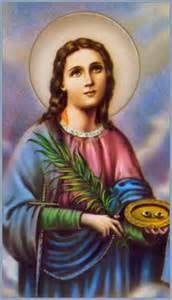 What do I mean?  My son has a picture book called Look Again, Thomas! which someone surely got for him because his name is in the title.  The story is about two little boys named Angelo and Thomas. Thomas has never spoken to Angelo, even though they are next door neighbors, until, one day, Angelo invites Thomas to go on an adventure.  Angelo takes Thomas to see all sorts of seemingly ordinary places, but then urges him, “Look again, Thomas!” Upon looking again, Thomas always discovers wonderful and fascinating details of the world around him (like the colorful fish swimming below the surface of a pond, the chameleon hiding in plain sight among the leaves in a forest, or the patterns on the snowflakes falling right in front of his nose) that he missed by not looking carefully enough.  By the end of the book, Thomas also realizes that he has been missing out on a great friendship with his next door neighbor Angelo because he never looked closely enough at the person right in front of him. I don’t know about you, but I know this is something I do all the time. 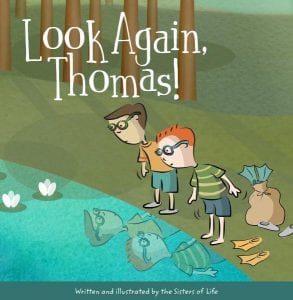 Dear Lord, drawing from the example of St. Lucy, let us strive to see the things and people around us with new eyes.  Let us notice when other people are experiencing times of darkness and be a light for them today.