(Prayer offered on the Public Address system for the entire La Salle Academy educational community on Thursday, 2 May 2019—Pro-Life Week)

In the Holy Land they have built a beautiful church at the site where tradition says that Christ gave the Sermon on the Mount of the Eight Beatitudes. The hill is so peaceful and you can just picture Christ preaching there. Jesus presents the Beatitudes in a positive sense as the virtues to follow in life which will ultimately lead to eternal reward. However, what Jesus told us is challenging. He describes those who are truly Blessed—the poor in spirit, the meek, the merciful, those who hunger for righteousness, the peacemakers—all very counter-cultural. 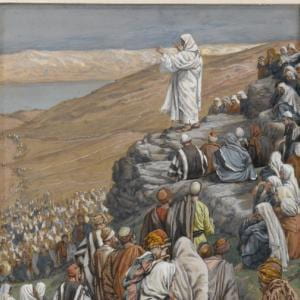 As we celebrate Pro-Life Week, we should reflect on instances where life is denied, where our culture says that only the strong should live. This is in direct contrast to the Beatitudes, since the Blessed ones can only be those acting as God would desire. Let’s look at a few of the topics. We know through science that the fetus is a fully alive human being at conception and, therefore, the right to live comes from God, not the parent. The two most prominent figures in the Pro-Abortion movement- Dr. Nathanson and Ms. McCorvey (aka the “Roe” in Roe v. Wade) both later denounced abortion as they became educated in what is really done to the child. In the case of assisted suicide, some feel that doctors should prescribe a lethal dose of medication to those who are disabled in any way, as if their life isn’t worth as much as someone who isn’t disabled, as if some people are better off dead. This is being applied routinely in the Netherlands to children and the mentally ill. Would that action be one of the blessed ones that Jesus talked about? And it’s the same premise when states use the death penalty and kill the accused to show that killing is wrong.

The powerful ones stepping on those without a voice is exactly the antithesis of those whom Christ spoke of as the Blessed ones and is against Catholic teaching. May we always treat one another with love and life-giving actions, so that at our end God will say, “Yes, you who are Blessed– enter the kingdom of heaven”. 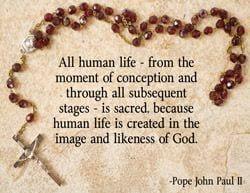 Let us pray the prayer of St. John Paul II:

O Mary, Mother of the living, to you do we entrust the cause of life.

Look down, O Mother, upon the vast numbers of babies not allowed to be born, of the poor whose lives are made difficult, of men and women who are victims of brutal violence, of the elderly and the sick killed by indifference or out of misguided mercy.

Grant that all who believe in your Son may proclaim the Gospel of life with honesty and love.

Live, Jesus, in our hearts, forever!