As we begin Advent and attempt to revere God and reform our lives in that spirit, we have a great model in the spirit of Christmas in today’s remembrance of Dorothy Day. As we meditate on the story of Jesus’s mother, Mary, and father, Joseph, we see them desperately looking for a place to stay, but being turned down everywhere. In a reflection by Dorothy Day on “Welcoming the Stranger” on which this prayer is based, we ask ourselves if we would have opened our doors to the strangers, Mary and Joseph. It’s easy to say yes, of course, but as Dorothy said, “if everyone was holy and handsome…it would be easy to see Christ in them.” Instead, those living in poverty or foreigners may not be attractive to us – as Mary and Joseph must have seemed to those in Bethlehem. 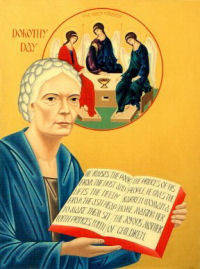 Although all popes from Pope St. John the XXIII through Pope Francis have admired Dorothy Day, she wasn’t always living an admirable life. However, she had a conversion of heart, converted to Catholicism and had a daughter whom she baptized into the faith. She continued to fight for those in need and for the preservation of the Earth. Dorothy first started a newspaper called The Catholic Worker, which preaches Catholic social justice and is still in wide circulation. This was followed by “knocks on the door” by those living in desperate situations asking if she would follow through on her views and requesting if they could have a room. This began her work in welcoming all in homes for the needy and calling on everyone to a Christian practice of hospitality for all, by being attentive to the Christ knocking on our door!

A few years before her death on this date in 1980, she received much recognition for her Christ-like ways, causing the Church to begin the canonization process. The Laetare medal award that she received from the University of Notre Dame, thanked her for “comforting the afflicted and afflicting the comfortable.” Dorothy Day said, “if I have achieved anything in my life, it is because I have not been embarrassed to talk about God.” May we, too, remember to be as courageous throughout our life and practice it in our words and our actions. Listen to Christ knocking! 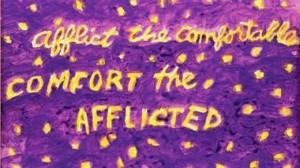 Let us pray.    Lord of all, both the comfortable and the afflicted, help us to start fresh this Advent to really practice Christian hospitality as Mary and Joseph needed that special night. May we remember your words, which Dorothy Day never forgot, “Did you give me food when I was hungry, a drink when I was thirsty, or clothes when mine were all rags?” Christ will say that every time we did this for the least among us, we did it for Him! May we be bearers of love and hope to all.

Live, Jesus, in our heart…forever.