(Reflections by Seniors on Teachers who epitomize the Virtue of Wisdom–completed for Ms. Naughton’s Senior Religion Class) 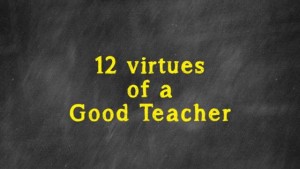 The wisdom that Mr. ____ possesses is something that I found quite incredulous- it is even something I recognized the first time I spoke with him. As I had my first conversation with Mr. _____, I realized that Mr. _____ is one of those people who listens to everything you have to say, ponders it, and then offers you the best advice through his knowledge, experience, and judgement. He always knows the right thing to say- and for this, he is wise. His constant guidance, opinion, and input always helps me make the right decision. Mr. _____’s insight is so reassuring, and that’s why numerous people often see him just to chat, especially when they may be going through tough times at home. Although I have only known Mr. _____ since last year, I am so glad that he was welcomed into my life. He’s always there for me, especially when I simply just need someone to listen. I always know where to find him and I am forever grateful that his wisdom has helped me choose the right paths in my high school decisions.

Coach _____ was really the first adult at La Salle that I met. I met him the beginning of the summer before my sophomore year at summer practices. And from that hot day in late June he made an impact on me. To me the virtue he exemplifies is wisdom. Although he is not very old, he is very wise, and probably one of the people I know that commands and receives the most respect. I really have not met a lot of people that dislike Coach _____. I know many that are afraid of him, but no one dislikes him, or has anything negative to say about him. Being a player of his I can attest that although his job is to win games his primary priority is that his players leave the field and leave La Salle a better man. He understands his players and the struggles that we deal with being teenagers in this day and age. He knows where we fall down and fall into temptations because he too is not perfect yet he has learned from past mistakes, and wants to instruct us on how to avoid them. He is not out there to show off or to win any awards; he is truly out there to make us better people. He preaches about family, about school, about sports, about friendship, love, and he says that we need to want to be above average. If we strive for average we will get average. In all areas of our life. He is huge on the principle of consistency and says that it is the single most challenging thing to do, to be consistently positive and good. He speaks about character, and how the real definition is what we are when nobody’s looking. He doesn’t sugar coat things, and because he is sometimes harsh, we as kids, who often don’t listen to adults, get his messages, and they really stick, at least with me. His wisdom has made me a better person I feel, not because it has literally changed and formed me into something better, but because it has made me aware of myself and his messages are always in my head, encouraging me to do the best I can in all areas of life. That is why I feel Coach _____ is very wise.

Next, wisdom is a definite when it came to Mr. _____’s  English class sophomore year. I absolutely adore English, and everything that comes with it, but he opened my eyes wide every time I set foot into his classroom. I learned so much more that just how to write, analyze books and form a sentence. Whether it was a mini history lesson, a life lesson or just a talk about his family, I learned something new everyday. It was amazing. There was always some type of wisdom that he passed onto his students each and everyday. Of course, I also learned a ton of English in the class also. This particular class made me finalize my decision of wanting to be a High School English teacher. I was always thinking about such a career, but Mr. _____ put that into perspective. His innate wisdom that he so unknowingly shared everyday made such an imprint on my life. I’ve thanked him many times, but he just thinks he was doing his job. Yet he has done so much more than just his job.