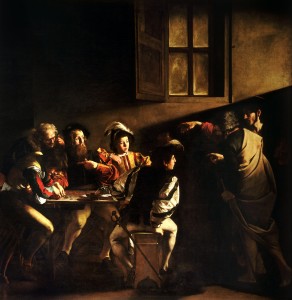 On a warm August evening in 2008, I found myself sitting in the church of San Luigi dei Francesi staring at this painting in front of you that measures 10.5 x 10.8 feet. As I sat in the dimly lit church after a rather long day of walking around in the hot sun exploring the city of Rome, I tried to envision myself as one of the characters in this masterpiece. 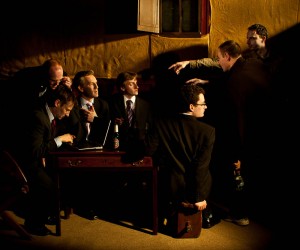 This beautiful oil based painting by the great Italian painter Michelangelo Caravaggio depicts a well-known story of the New Testament; the painting is titled “The Calling of St. Matthew.” Long before Matthew, also known as Levi, was Jesus’ disciple, he was a hated tax collector. Here Caravaggio captures the moment Jesus calls out to Matthew to leave behind his old life and come follow him. As most great artists often do, Caravaggio does not provide instructions on how to interpret his work and therefore we are left to debate amongst ourselves what is happening on the canvas. 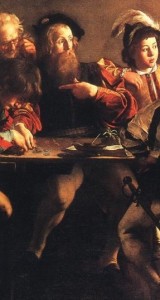 The men sitting at the table are Matthew and his fellow tax collectors; of that much we can be sure! The important question we ask is which one of the men is Matthew? Since none of them is wearing name-tags, that question is hard to answer but I think I can narrow it down. Three men look at Jesus while the other two really can’t be bothered. One man in particular stands out…the one pointing to himself or is he? If that man is in fact the one being called by Jesus to follow him, his response of “who me?” is one that evokes questions of self doubt, insecurity…why would Jesus want me? Another possible interpretation of his gesture is that rather than pointing to himself, he is in fact pointing to the man too preoccupied with counting money to even acknowledge Jesus’ call…in this case the man pointing could be asking “Him… seriously…you want him…why him?”

Both are interesting takes on this work of art but they also challenge us to ask the same questions about ourselves and those around us. Do you feel as though you are not qualified to tryout for a play, a team or maybe pursue a new endeavor that in the past seemed out of reach? Or are you the one in the background questioning why someone else has been given an opportunity that you think they don’t deserve or are qualified to have? In either case, the heart of the issue is that Jesus saw something in Matthew before he himself was able to see it. Whether it’s a teacher suggesting you join the debate team because you want to argue everything that is stated in class, whether it’s trying out for a musical because secretly you have an awesome voice and just lack the confidence, perhaps your coach has either asked you to take a lesser role on the team or even play a different position that you don’t like or don’t feel equipped to play. Trust that you are not being led astray and those that see potential in you are not setting you up to fail, rather they are calling out to you in order to help you maximize your potential…Let us pray 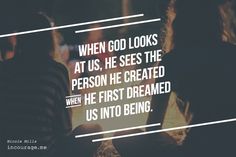 Loving God, open our hearts and minds to hear your voice calling out to us. Teach us to trust in you and remind us that long before we see ourselves…you see us first!  Amen.